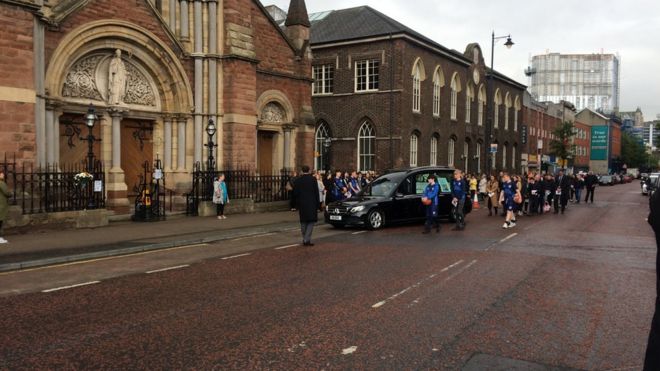 Priest tells Noah Donohoe’s family: ‘We can’t imagine the depth of your sorrow and grief’

THE Requiem Mass for Noah Donohoe has taken place in Belfast this morning.

The body of the missing Belfast teenager was found in a storm drain in north Belfast last Saturday.

The 14-year-old He had been missing since Sunday, June 21.

After the discovery of his body, police said no foul play was involved Noah’s death

Noah’s St Malachy’s school friends and members of the basketball team he played for walked alongside the hearse and provided a guard of honour at St Patrick’s Church on Donegall Street.

His mother Fiona, aunts Shona and Niamh, and their wider family circle led the cortège.

People lined the street outside, including some of the volunteers from the Shore Road who had helped search for Noah.

The only sound was the bells of St Patrick’s as the cortège passed by for the 11 am for the Requiem Mass and celebration of Noah’s life.

In his homily, Fr Michael McGinnity said that since his body was discovered, many people “are consumed by a sadness that cannot be put into words”.

Addressing Noah’s heartbroken mother Fiona, he said: “Countless people across Belfast and far beyond it… are holding you Fiona and your family in their thoughts and prayers.

“People everywhere are united in their heart-felt sympathy towards you and the wider family circle.” 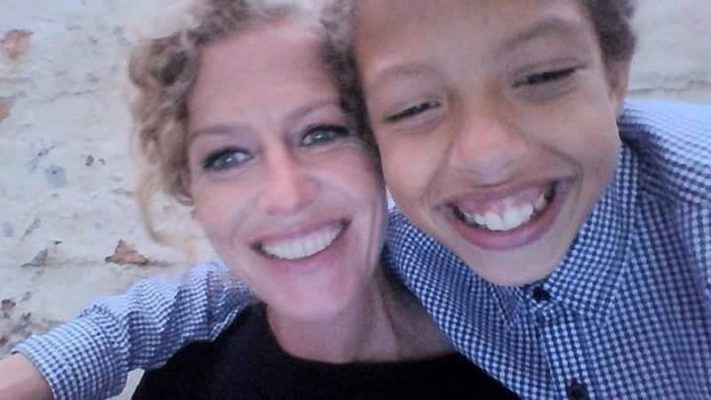 “At the same time, we gather here, very conscious of your gratitude to so many people who have reached out to you as a family in your hour of need.”

Fr McGinnity paid tribute to those “who took to the streets from across the community, day after day, in search of Noah”.

“We also remember the police and rescue teams who were relentless in their efforts to find him,” he said.

Noah’s school friends were also attending a prayer service at St Malachy’s College during the funeral.

Fr McGinnity said they too were “united in heart-felt sympathy for Noah’s family”.

“We also hold in our hearts today Noah’s friends as they come to terms with their devastating loss. We remember the messages they sent to Noah’s family, and the many tributes they paid to Noah on social media and across the airwaves.

“Those messages and tributes have been a source of immense comfort to Noah’s heart-broken family.”

In his death notice, Noah’s family said his “beautiful, pure young soul fills the hearts of his mother Fiona, his aunts Niamh and Shona, their beautiful children and his uncle Gearoid”.

It added: “He comforts his grandparents Margot, Gerry and Linda and his beautiful, strong friends. He will be safe in the hugs of his aunt Siobhan in heaven.”

In a tribute to those who helped to search for the schoolboy, the message added: “Noah’s love was great enough to reach the selfless hearts of north Belfast and beyond as they showed overwhelming compassion and empathy in bringing Noah home. 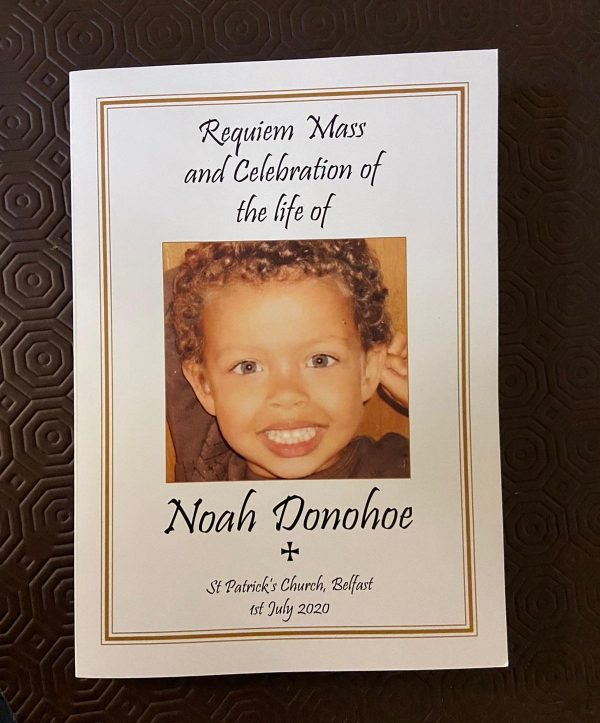 “Love has no boundaries.”

Noah’s school said it was “blessed to have had such an outstanding student and person as a most valued member of our family”.

St Malachy’s College said Noah’s “caring nature, calm demeanour and big smile were some of his great gifts that helped others do their best”.

The school said that Noah was a talented musician and keen rugby and basketball player.

He also received a number of awards in his three years at the school, including The Spirit of the College Award, full attendance and class prizes.

“We are all deeply saddened at Noah’s passing away, and we offer prayers for and support to his mother, Fiona, family members, friends and also his extended family – all of us associated with St Malachy’s College,” the statement added.

“Noah will always be a treasured member of our Malachian family.”