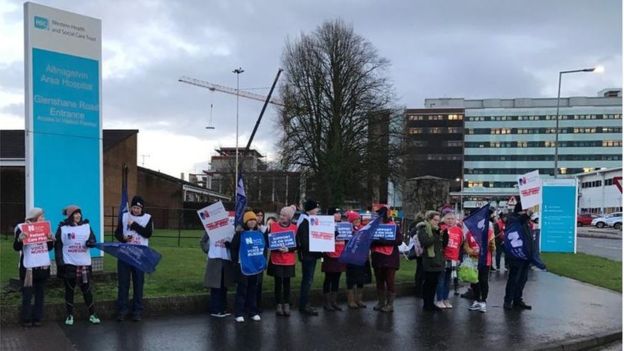 HEALTH unions in the North of Ireland are to end their industrial action after voting in favour of the Department of Health’s pay offer and commitment to safer staffing levels.

They called for pay to be introduced at the same level as their counterparts in the rest of the UK as well as increase recruitment in order to improve safety levels in the sector.

Health Minister Robin Swann – as one of his first acts – pledged to implement pay parity and consider staffing levels.

The unions tentatively accepted the resolution and paused their action in order to put the offer to its members.

NIPSA, however, rejected the offer and is continuing its industrial action.

Anne Speed from Unison, speaking on behalf of the trade unions, said: “Having separate consultations with our members, health trade unions have accepted the proposals on pay parity and safe staffing that have been endorsed by the Health Minister and the Executive in January.

“It has been a very difficult period of industrial action for our members and that has not been without hardship but they have given us the mandate to agree to these proposals by secret ballot.

“It is now the responsibility of the Department of Health to ensure that the pay agreement is implemented swiftly.

She added: “Leaders must also ensure pressure must be exerted to take forward proposals on safe staffing levels as quickly as possible to ease the significant pressure on staff, to fill those permanent vacancies that have occurred.

“We are trying our hardest to deliver with them and with the Department of Health so this will be the big programme of work in the coming months.

“We are starting that with a serious discussion on agency spend. We have a commitment from the department on principle on reducing agency spend and staffing so we will be looking into the detail around that this afternoon.”

At the height of the strike action around 15,000 workers joined picket lines forcing the hospitals to reschedule thousands of procedures and appointments.

It was the first time in the 100-year history of the Royal College of Nurses that it took strike action.

The Royal College of Midwives celebrated a “significant victory”.

Karen Murray, said: “We fought for this positive framework agreement for our members and negotiated hard for pay parity with our colleagues in England and we got it.

“It is a testament to the commitment and combined strength of our members that we have been able to get this deal for them so quickly after the return of government in Northern Ireland.

“We will now be working with the Department of Health to get this well-deserved pay award into our members’ pay packets as soon as possible. This shows our politicians value midwives and are prepared to invest in them. Staff who are valued and supported deliver better care, which is ultimately what we are all here to do for women, babies and their families.”

Health minister Robin Swann welcomed the move by the unions.

“My first objective on taking up the post of health minister was to secure a resolution to the industrial action and I am delighted that this has now been achieved,” he said.

“This was made possible through important pay and staffing commitments which I was able to make with Executive-wide backing and I am grateful to my colleagues around the Executive table for this vital support.

“As I have repeatedly stated, our health service will need sustained investment year on year for the sake of patients and staff.”

NIPSA – the largest union which represents support staff in the health care system – rejected the health minister’s proposals on safe staffing, saying no financial commitment was made, no timescale was offered and no shortfalls in social care were addressed.