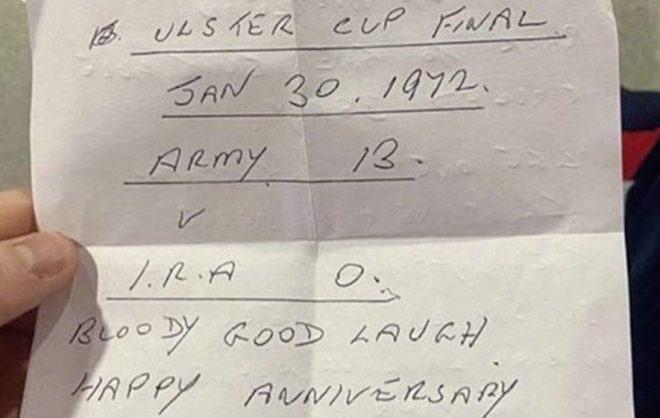 The Irish News today reports that the letter, sent on the 48th anniversary of the 1972 killings, compared Bloody Sunday to a football match with the result “Army 13 v IRA 0”.

The writer also made reference to loyalist killer Michael Stone, describing him as a hero.

The letter echoed offensive graffiti in some loyalist areas in the days after Bloody Sunday about the 13 young men shot dead in January 1972.

In his report following an extensive inquiry, Lord Saville concluded that all those killed and injured were shot without reason and were innocent of any wrongdoing.

Mr McClean responded on Instagram with the comment: “No name, false address, he’s so brave. Rent free in these morons’ heads.”

The Stoke City player has frequently been targeted with abuse over his refusal to wear a poppy on Armistice Day.

In a recent open letter, he stressed that while he respected all who fought and died in two world wars, he believed that to wear a poppy would be “gesture of disrespect for the innocent people who lost their lives in the Troubles – and Bloody Sunday especially”.

James has been the subject of ongoing abuse at grounds in the Championship where he plays his football with Stoke City.

The anti-racist campaign ‘Kick It Out’ has called on football chiefs to do more to stamp out the racist chanting directed at James on an almost weekly basis.