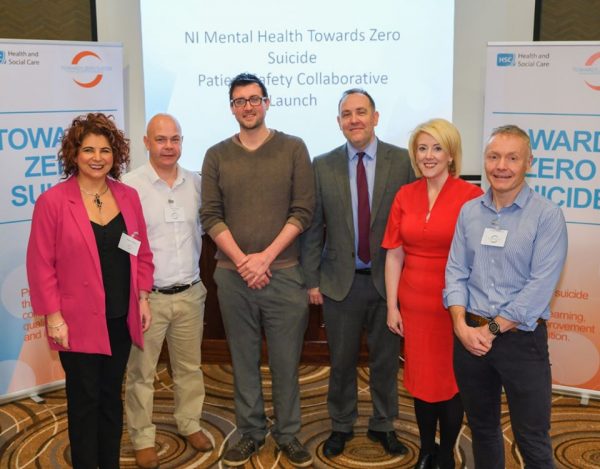 Towards Zero Suicide launches in North of Ireland

A NEW programme to improve patient safety and reduce suicide rates has launched in the North of Ireland.

Towards Zero Suicide Patient Safety Collaborative involves all five Trusts and Prisons and aims to research and adopt best practice in suicide prevention work across mental health services and the prison population.

Zero Suicide within mental healthcare systems emerged in the 2000s in the USA.

Significant reductions in deaths of service users have been reported by early innovators and implementers creating a momentum that has facilitated its spread in the USA and beyond.

Opening the launch Dr Michael McBride, Chief Medical Officer said “Every life lost to suicide in Northern Ireland is an individual tragedy and a life changing experience for those who were close to the person.

“Towards Zero Suicide is an integral part of the Department of Health’s overall Protect Life 2 Strategy.

“I welcome its launch here today aiming to deliver the best possible care to those in crisis seeking help from our mental health care services.”

It was introduced to the NHS by MerseyCare NHS Trust in England with early results indicating a reduction in suicides of 23% within three years.

Oscar Donnelly, who chairs the regional Toward Zero Suicide Patient Safety Collaborative explained: “We know that around 27% of those in Northern Ireland who have lost their lives to suicide have accessed mental health services in the year before their death.

“It is essential that we look at best practice elsewhere and bring this to Northern Ireland to improve patient safety and reduce death by suicide.‘’

“We are working with mental health staff, prison staff, service users, carers and a range of partners and academia to create this culture throughout Northern Ireland, to reduce suicide rates and save lives.”

Towards Zero Suicide involves a system wide commitment to suicide prevention by improving outcomes at all levels and eliminating gaps within the delivery of care.

It views suicidal behaviours as directly amenable to interventions rather than as purely secondary to other underlying problems.

Each Trust and prisons will be working at an organisation level and on the ground to apply best practice at all stages of a service user’s journey, with a focus on the involvement of families and carers in providing information and support.

Illustrating the value of the collaborative, Professor Siobhan O’Neill from Ulster University explained, “alongside local research, learning and lived experience it will provide a highly structured and informed lens through which we can analyse and improve the services we provide.”

The North of Ireland has one of the highest suicide rates compared to other areas of the UK.

The Department of Health recently launched the Protect Life 2 Strategy and Towards Zero Suicide is one strand of this.

Towards Zero Suicide launches in North of Ireland was last modified: January 9th, 2020 by John