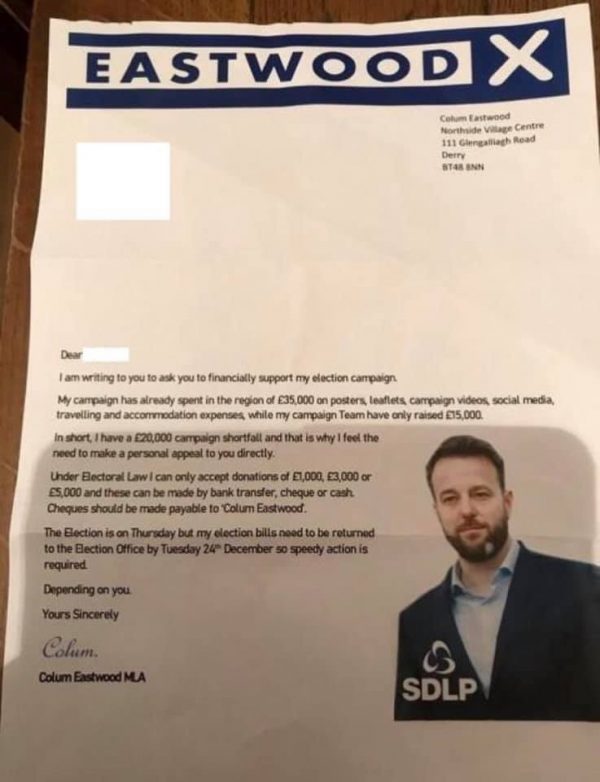 DIRTY TRICKS: The fake letter which purports to be from SDLP leader Colum Eastwood which is circulating in Derry

SDLP leader Colum Eastwood out on the election trail in Derry. Bookies have him favourite to win Foyle seat[/caption]SDLP Leader and Foyle Westminster candidate Colum Eastwood has slammed dirty tactics from political opponents in Derry.

The party says it has referred fake letters claiming to be from Mr Eastwood to the Electoral Commission and PSNI for investigation branding the documents as “lies and criminality”.

The bogus letter claims Mr Eastwood has already spent £35,000 on his election campaign and needs a further £20,000 in donations to keep it going before voters go to the polls this Thursday, December 12.

Said the Foyle MLA: “I am disgusted that fake letters purporting to be from me have been delivered to houses in Derry.

“Let me be clear, these letters are not from me nor are they from anyone associated with my campaign.

“This is an organised attempt to lie to the people of Derry, to poison our democratic process and those responsible should be ashamed.

“The people of Foyle know that this is a close race between myself and Elisha McCallion.

“Voters should make up their minds on our records, not a campaign of dirty tricks.

“Sinn Féin has called us dishonest – they must now condemn these vicious lies.

“My team and I are running a positive campaign, focusing on how we can invest in Derry, make our communities a better place and work with others to stop Brexit.

SDLP leader Colum Eastwood out on the election trail in Derry. Bookies have him favourite to win Foyle seat

“I made it clear weeks ago that the SDLP will engage in a clean campaign and I would take strong action if anyone was suspected of nasty personal attacks.

“That has been our approach to this whole campaign and it is disappointing others have not followed suit,” added Mr Eastwood.

An SDLP Spokesperson added: “The letters which have been falsely circulated in Colum Eastwood’s name amount, in our view, to a breach of electoral law.

“The SDLP has referred this matter to the Electoral Commission and to the PSNI for investigation.

“The election in Foyle will be a close race.

“Some candidates are obviously panicking if they have to stoop to lies and criminality to damage Colum Eastwood.”