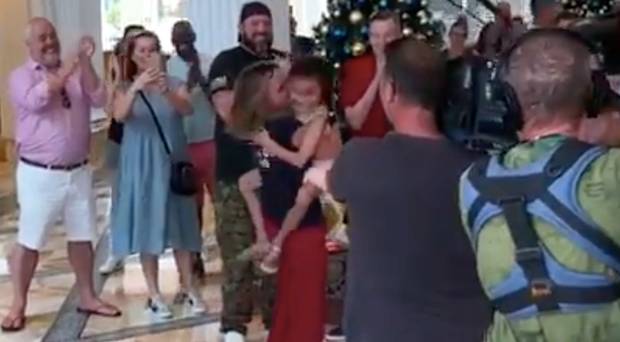 Nadine had a tearful reunion on Saturday with daughter and family

DERRY’S fabulous Nadine Coyle enjoyed a tearful reunion with her daughter yesterday as she left the celebrity jungle.

The ex-Girls Aloud band member was voted off I’m A Celebrity on Friday in a shock double eviction with Caitlyn Jenner.

And the 34-year-old was reunited with daughter Anaíya Bell having not seen her for over a month.

Arriving at the Palazzo Versace Hotel on the Gold Coast yesterday after being evicted from the jungle, Nadine’s five-year-old daughter ran out to give her a huge hug in front of photographers and TV cameras.

She was voted off the show on Friday along with 70-year-old reality TV star Caitlyn Jenner.

Speaking after getting the boot Nadine said she was looking forward to seeing her family and relived teaching Caitlyn Jenner some famous Girls Aloud dance moves.

She said: “I’m just really looking forward to seeing everyone. I feel really good, I’m so happy for everybody that’s in there, I love them but it was really good (to leave) I was just like ‘bye bye! See you later!’

“We’ve been making plans, I have to take Jacqueline Rossa’s kids to see the koalas, big plans, I’ve loads to do.

“Me and Caitlyn, we came in together in the helicopter and now we’re going out together today so I think it’s perfect. It all came back.

“Isn’t she brilliant? She’s a dancer, she’s got it. I’m so happy for Caitlyn.”

Referring to skydiving into camp to start the show, she added: “Caitlyn was so chilled about it, she was ready to go and do it. I don’t think I am over that moment yet, I am still shell-shocked.”

Coronation Street actor Andy Whyment – who plays factory packer Kirky – is favourite to be crowned King of the Jungle on tonight’s I’m A Celebrity final on ITV at 9 pm.