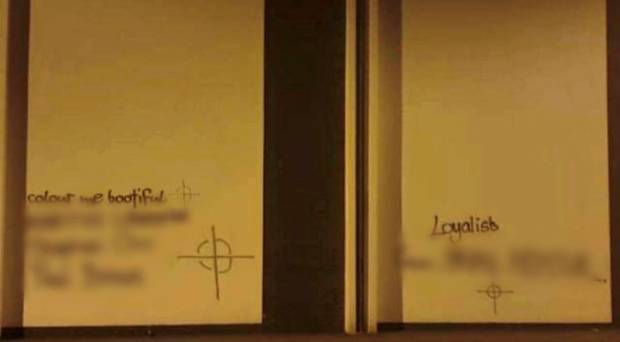 POLICE have launched a probe after graffiti issuing threats against prison officers was daubed on a community centre in Derry.

The names of a number of prison officers was daubed on the building in Central Drive.

It also calls for an end to “brutality” in Maghaberry Prison and is signed “IRA”.

A further name of a prison officer was added on Monday night.

The graffiti has been condemned by the union which represents rank and file prison officers.

Police appealed for witnesses after what they described as “criminal damage” in the Central Drive area.

It was reported to them in the early hours of Monday, December 2.

“Police received a report that graffiti had been painted on the wall of a property in the area sometime overnight,” a PSNI spokesperson said.

“Police are appealing to anyone who witnessed this incident or who has information that could assist police with their enquiries to contact officers in Strand Road on 101, quoting reference 420 02/12/19.

“Alternatively, information can also be provided to the independent charity Crimestoppers on 0800 555 111, which is 100% anonymous and gives people the power to speak up and stop crime.”

“Prison officer’s carry out their duties with impeccable impartiality. Words just can’t express how disgusting this is.

“We have supposedly moved on with the Good Friday Agreement, but some people obviously want to pull us back.

“The role of prison officers is very diverse and has changed significantly since 1998.”