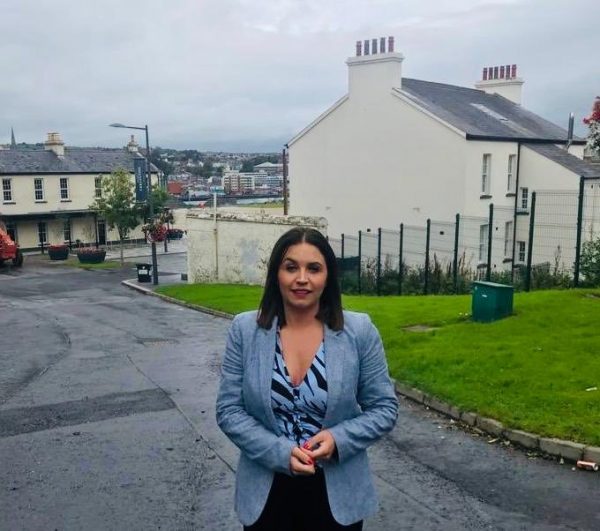 SINN Fein Foyle election candidate Elisha McCallion has been called on to apologise amid claims she insulted residents in the Derry constituency.

According to those who saw the video, Mrs McCallion allegedly encouraged residents in the area to answer their doors, adding they should not worry as she was not the “debt collector”.

Cornshell Fields is a large estate on the outskirts of the Shantallow area, with a mix of social and private housing, some parts of the area have suffered from increased levels of social deprivation.

There is no evidence of the video on Mrs McCallion’s social media platforms, however a number of users who claim they saw the video said the alleged original post was deleted when comments were made that the content was derogatory towards residents of the area.

The SDLP and People Before Profit have both since called on Mrs McCallion to apologise, and say hurt has been caused.

Mrs McCallion’s husband Declan McCallion has posted to Facebook calling on those who had taken offence that it was not his wife’s intention to cause any hurt.

Writing in a Facebook post Mr McCallion said: “Understandably people can become angry and upset if they think there (sic) integrity was attacked but before going on the offensive and lowering ones own integrity gone just seriously take a second and think!

“Derry and its people are famously known for the banter and saying something like ‘if ye hear a knock on your front door dont worry its not the debt collector’ live on Facebook was only abit of banter.”

SDLP councillor Brian Tierney says that Mrs McCallion, who has represented the area for years in different capacities, should have known better.

“I’ve been speaking to people in Cornshell and have been contacted by people all day, and there’s a sense of hurt and anger that one of their public representatives would try and demonise their estate,” he said.

“I’ve represented this area from 2013, and these are good decent hardworking people and they’re upset why this alleged video was posted on social media like it was a joke.

“It’s unfortunate that some people in Derry have to use loan sharks and payday loans, which in itself represents a failure of government and nothing to joke about as a responsible politican.

“I don’t think the comment would’ve been made elsewhere, and she should’ve known better and known it was insensitive.

“I think she should apologise, I don’t think it needs clarification, if you look at social media in the last day or so, regardless of the alleged deleted video it’s widely accepted that there was a comment made about the area.”

Shaun Harkin, People Before Profit candidate for the seat said that Mrs McCallion should know that in Derry, debt is no laughing matter.

“For an elected official to think it is (a laughing matter), just shows how out of touch they are with the lives of ordinary people here,” he said.

“That they would mock people in debt is a sign of contempt and shows again that they are not fit to represent ordinary people.”

Mrs McCallion was repeatedly asked for comment over the weekend which she declined, before her spokesman said: “I won’t comment on something that I haven’t seen.”