Armed and masked INLA members in Derry pictured on Tuesday

A PICTURE has been circulated on social media to show an INLA show of strength in Derry.

The PSNI made two arrests shortly after the photo was circulated on various social media platforms this week.

They are standing on a pavement beside a wall which has been graffitied with “INLA”.

It’s believed to have been taken in Derry and on Tuesday.

Police blamed the group for an increase in paramilitary attacks in the north west of Northern Ireland.

A 19-year-old Strabane man arrested by detectives investigating criminality linked to the INLA was released on Wednesday.

Meanwhile, a 57-year-old-man arrested in Londonderry as part of the same investigation remains in custody.

Mobile phones, documentation and other electronic devices were also seized by police during three searches. 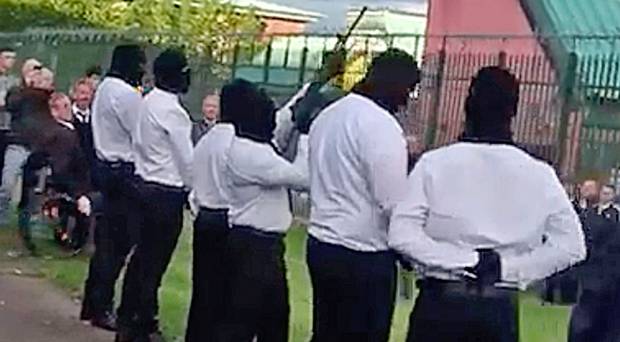 Part of the operation was linked to an investigation into shots being fired following the death of former INLA prisoner Michael McElkerney in May this year.

“Part of [the] operation also relates to an investigation into an incident on May 20 this year in the Divis area of Belfast, when an individual recklessly used an automatic weapon to fire a series of shots into the air in a heavily populated area,” said Detective Inspector Tom McClure.

“The group are a priority for due to the level of threat, risk and harm they pose to our communities and the breadth and depth of their criminality,” he said.

DI McClure said police believed the INLA was behind a recent spate of shootings in Derry in recent weeks and months.

Arrests made by police after Derry INLA photo circulates on social media was last modified: October 17th, 2019 by John