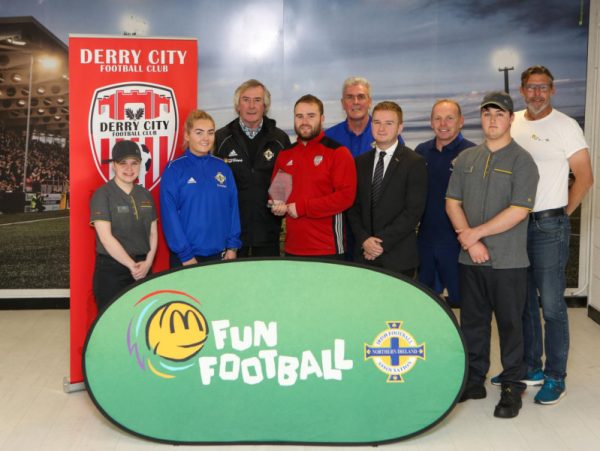 AFTER recent successes, Rory Kehoe has now become the third and latest Coach within City’s Women’s section to receive a prestigious Award this year.

Rory has been selected as 2019’s winner of the IFA’s Regional Coach of the Year Award.

Girls and Womens football has developed dramatically within our Club and within the district of Derry over the last 5 years.

Rory Kehoe’s creativity and overall input has been to develop the girls and women’s program within Derry City.

Rory, as the then first team women’s manager in 2014 decided to establish what is now known as the Derry City FC Women’s Youth Academy. With opening training session numbers of just 6 players, the academy now boasts over 70 players in the following age groups u7’s, u9’s, u11’s, u13’s, u16’s & u19’s.

Rory has been instrumental in the growth of the teams in terms of coaching, mentorship, player recruitment, player retention, and ultimately in the development of a Club ethos of an ever determining self-confidence and empowerment within each of these squads structures.

Rory has shown continual dedication to the Club, his colleagues and to each of the squad structures.

He has developed this Club massively during the past five years and in that time has developed his own skillset, brought others along with him and thanks to his own initiative, creativity and passion for girls and women’s football – the club he represents is now unrecognisable from the club he began coaching with at the age of 16.

He has continually coached, mentored and trained those around him to ensure that all girls and women, of all abilities get as much out of their experiences as they can.

Alongside other Club Volunteers such as Mark Terry – winner of the Derry and Strabane ‘Children’s Coach of the Year 2019’ Award and Caoimhe McLaughlin – winner of the Northern Ireland Women’s ‘Services to Sport Award 2019’ Rory and his colleagues have devised a program for girl’s football to promote, foster, and develop women’s football in Derry and the surrounding district and community areas.

Rory and his colleagues are creating International opportunities for girls, inspiring change and helping young people fulfill their potential, both on and off the pitch.

Always striving for higher standards and equality within Women’s football.

He is at the core of vital player and club development efforts which has allowed it to grow, flourish and compete in a wider range of competitions across the North.

His unwavering commitment to the club, our players and coaching staff over many years hasn’t gone unnoticed and we’d like to congratulate him on his Award and thank him for all his hard work.

If you would like to know more information on our Girls and Women’s squads, including training times please visit Derry City FC Women on Facebook.