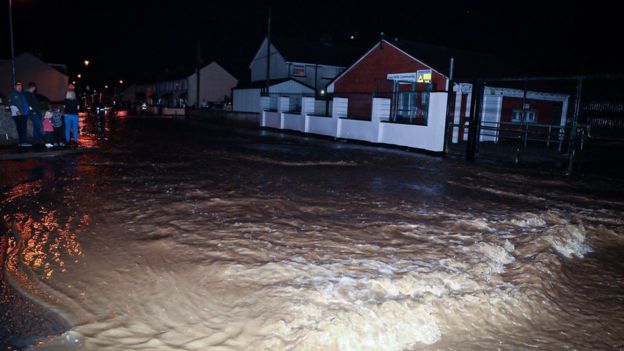 Residents return home after village flooded by three of water

RESIDENTS have returned home after being evacuated on Sunday night in what was described as the “worst flooding” in Sion Mills for years.

Sixty firefighters responded to 30 flood-related calls which were made at around 6 pm.

Several roads closed due to heavy rain have since reopened but motorists have been advised to remain cautious.

He said there were eight to 10 inches of water places with some deeper localised patches.

Mr Black added that there would be a multi-agency effort to assist residents affected by the flooding although there was not yet any indication of the damage caused.

Deputy Mayor of Derry City and Strabane District Council SDLP councillor Cara Hunter, who said it was the worst flooding for years, added: “This is an ongoing problem.

“In Sion Mills we are seeing two, three feet of water and it is now entering homes.”

She said buses had been put on to take those affected from the village.

“This flooding has been extremely distressing for local residents and every effort must be made to support them and to ensure it does not happen again,” she added.

Melvin Hall Community Centre was opened for anyone who had to leave their home and an incident centre was set up at McGillion’s garage in the village.