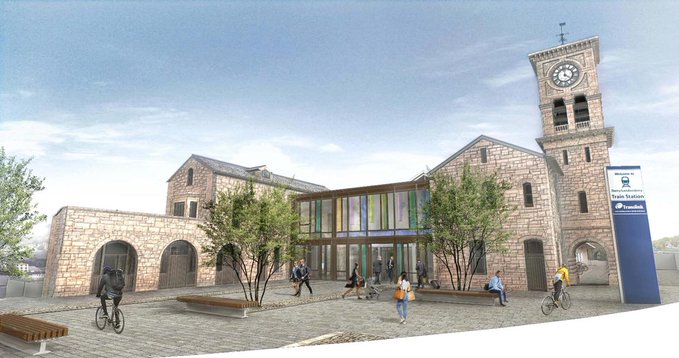 TRANSLINK say that construction, track and signalling work on the North-West Transport Hub at the Grade B-listed Waterside Train Station in Derry is entering its final phase.

They say these works are on schedule to complete during the coming weeks.

However, the ongoing work will require a scheduled line closure, in place from the evening of Tuesday 8th October until Sunday 20th October inclusive.

This is to facilitate essential track and signalling work as part of this major Translink project.

Representing an investment of approximately £27 million, funding for the North-West Transport Hub project has been secured from the European Union’s INTERREG VA Programme, managed by the Special EU Programmes Body (SEUPB), with match funding provided by the Department for Infrastructure and the Department of Transport, Tourism and Sport in the Republic of Ireland.

Customers who would normally travel to and from Bellarena should be aware that bus substitutions will serve Limavady Bus Station throughout this period and that Bellarena will not be served.

Scheduled Ulsterbus services can also be used as follows:

Valid rail tickets will be accepted on rail substitution bus services and scheduled Ulsterbus services 134, 143/144 and 234 only.

Passengers travelling directly between Derry~Londonderry and Belfast can use Goldline Express Services 212, although users should note that rail tickets are not valid for use on 212 services.

Timetable information will be available online at www.translink.co.uk

On Tuesday 8th October, 20:10 and 21:10 NI Railways services from Great Victoria Street will operate a normal service to Coleraine and will then operate to Portrush.

Bus substitution services will be in place for those travelling onwards towards Derry.

During the closure period, a regular NI Railways timetable will operate between Great Victoria Street and Coleraine, with all services operating to and from Portrush. A

All services on Monday 21st October will operate as scheduled.

Engineering equipment will be operating along the line throughout the closure.

As always, Translink would ask the local community to remain vigilant and not to become complacent.

It will be important to impress upon young people the potential dangers of using the tracks as a shortcut or trespassing on or near NI Railways property or around engineering sites.

Translink says it would like to “thank commuters and members of the community in the North-West for their patience while we carry out this essential work”.

Further information can be found at www.translink.co.uk/nwhub