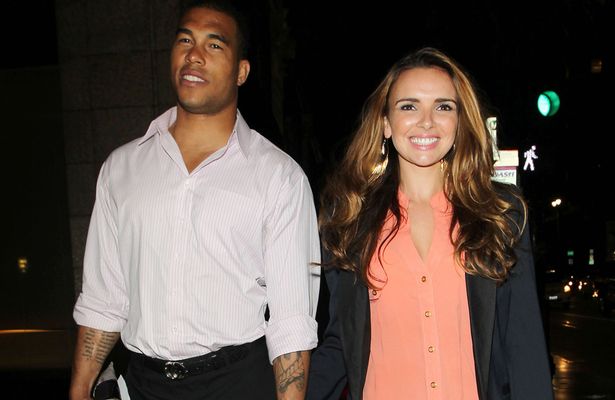 IN HAPPIER TIMES.. Nadine Coyle with Jason Bell but couple now said to have split

The 34-year-old singer is said to have decided to call it quits with the former American football player and NFL pundit – who is the father of her five-year-old daughter Anaiya – after realising they were leading separate lives.

The couple first met when Nadine was working in the US in 2008.

Jason asked her to marry him in 2010, before splitting for the first time a year later.

They soon rekindled their relationship and he asked her to marry him again in 2014, just months before welcoming Anaiya into the world.

Speaking about the previous split, Coyle admitted she thought she was “too young” to get married at the time.

Nadine moved back to Northern Ireland three years ago to raise their daughter near her family, while Jason (41) remained in the US to focus on his TV commentary career.

A source told The Sun newspaper yesterday: “Although Nadine and Jason were never married, they lived as a close family unit and remain good friends as they co-parent their young daughter.

“They still care for one another, but are no longer in a romantic relationship.”

Nadine had often referred to Jason as her husband despite them never marrying, and just last month she gushed over their “close family” bond.

The singer said: “I love to cook and hang out with my husband Jason and our daughter Anaiya.

And she also spoke about having more children, saying she would love to expand her brood in the future.

She admitted: “I come from a big Irish Catholic family, which is really full on, so another one would fit in perfectly.

“I probably wouldn’t even notice another one – there’s so many of us!

“I enjoyed the whole experience the first time round so if it were to happen I would be happy, but I’m not thinking about another one right now.”

Girls Aloud split in 2013, after forming on Popstars: The Rivals in 2002. Nadine returned to the music scene two years ago with a brand new song, Go To Work, which had over 1.1m streams on Spotify, hitting number one on their Viral Chart.

The Irish singer previously dated Dallas star Jesse Metcalfe for two years, but it ended when reports of infidelity on his part hit the headlines.

In an interview with Fabulous magazine, she said turning down major acting roles in the US had been the toughest choice while in the successful girl band.

She admitted not keeping in touch with the rest of the group, but didn’t rule out a reunion saying: “I would really like to.

“Never say never on that one.”