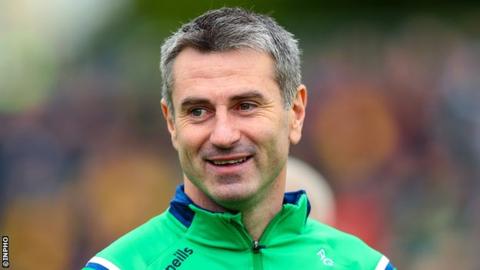 FORMER DONEGAL manager Rory Gallagher has been named as the new boss of the Derry senior football team.

Gallagher was last night appointed as successor to Damian McErlain, who stepped down in July.

Gallagher, who vacated his post as Fermanagh manager this summer, has been appointed Oakleaf manager on a three-year term.

He was ratified last night at a meeting of the Derry County Board, with a vote seeing 24 delegates in favour and 15 going against.

The 41-year-old will be joined on the coaching ticket by Ciaran Meenagh and Enda Muldoon.

Gallagher took Fermanagh to the 2018 Ulster final, which they lost to Donegal, having managed Donegal from 2014-2017.

The Belleek native previously was Jim McGuinness’s number 2 for three years, during which Donegal won two Ulster titles and the 2012 All-Ireland.