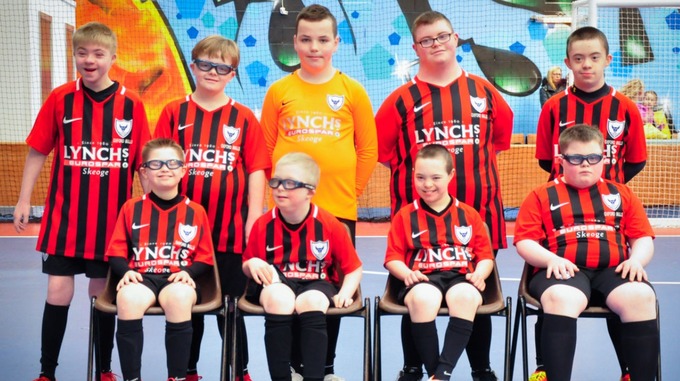 A FOOTBALL team for children from Derry and Strabane with Down’s Syndrome is still enjoying celebrity status, three years after going viral.

Oxford Bulls, a team made up of 8 to 14-year-olds from Derry, led the opening day parade for the Foyle Cup on Tuesday – a week-long international tournament with more than 6,000 players, coaches, match officials and supporters.

Founded four years ago by Kevin Morrison, whose son Adam, 13, has Down’s Syndrome, Oxford Bulls rose to acclaim after a video of the team playing against Stoke City winger James McClean went viral.

Mr Morrison says the club has been on an uphill trajectory ever since, and the boys are now “mini celebrities” both home and abroad.

“Around two years ago we were trying to organise matches, instead of having the boys training all the time, but we couldn’t find any teams who would play us,” Mr Morrison said.

“They’re like mini celebrities now, this is our third Foyle Cup, we play in the disability section, and we have four teams now.”

Mr Morrison added: “They led the parade on the opening day, and they were absolutely phenomenal, everyone knows them now.

“We play all our matches in one day, and we got our trophy on Tuesday, so the boys are delighted.

“We hope to double the number of teams we field, and have eight next year, but it’s not that straightforward as it’s hard to get teams of similar abilities because we have so many disabilities within our team.

“We took them to Liverpool last year and played two matches with Down’s Syndrome teams, but we couldn’t find anyone of our own age, so we had them playing against teenagers and lads in their 20s, but we were so proud of them, the opposing team were twice their size and probably going for pints with their dads after.” 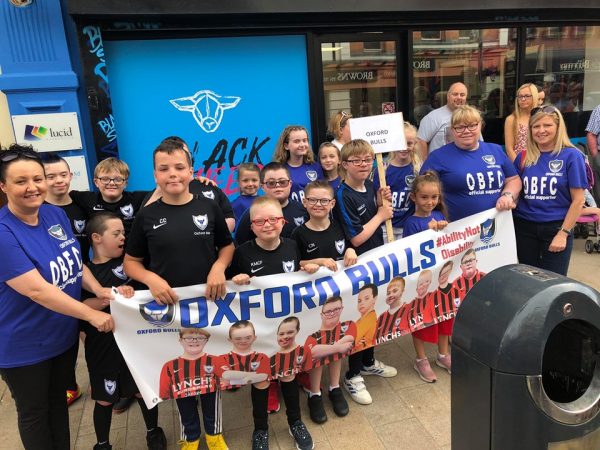 Oxford Bulls all set for the Foyle Cup parade

Entirely volunteer-run, health and safety is the priority for Bulls coaching staff, and coaching is almost entirely on a one-to-one basis.

“Impulse control is important for children with Down’s Syndrome, so we need to keep numbers tight to coaches, it takes patience, but the pay-off is worth it.

“We have people contacting us from all around the world saying the boys are an inspiration, and they’re looking to set up their own team in their own countries.

“We just want people to know that this is not the old stereotypical kids with Down’s Syndrome.

“We played against Celtic legends recently, Rab Douglas was the keeper, a former Celtic keeper, and one of our boys chipped the ball over his head.

“It has a quarter of a million views on YouTube, it’s gone crazy, our kids can do these things, it just takes a bit longer to coach them, and they get a lot out of it, it’s ability not disability.

“My own son hated loud noises, crowds and was really shy, we’re four years in now, he’s leading a parade, standing on a stage, and asking me about football scores like any wee boy would do with their dad.

“When we first started, we had 10 players, it took the first six months to teach them to shoot in the other direction from the other team, but that’s what it’s all about.

“They’re mini celebrities now, but eventually we won’t be seen as something different, and that’s what we want.”