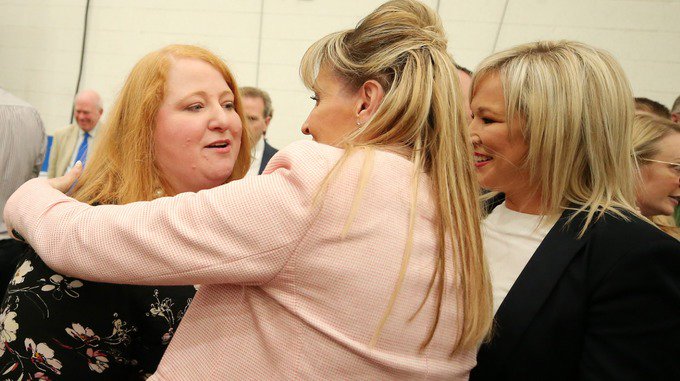 ALLIANCE Party leader Naomi Long shocked the pundits as she took the second seat in the European Parliament elections.

Pollsters had been predicting Martina Anderson and Diane Dodds would be returned to Strasbourg for their respective Sinn Fein and DUP parties as MEPs.

And SDLP leader and Foyle Colum Eastwood was expected to take the third seat.

But there was genuine shock at the count centre in Magherafelt after the first preference votes were revealed and Naomi Long was in third place with almost 106,000 votes, leaving Eastwood trailing in fourth spot.

Although Martina Anderson topped the poll with 126,000 first preference votes, it was Diane Dodds who was first elected after the UUP’s Danny Kennedy was eliminated and his surplus was transferred to Mrs Dodds.

At the fourth stage Colum Eastwood was eliminated and his transfers went to Mrs Long and at stage five she took the second seat with a staggering !70,000 while Martina Anderson claimed the third seat with more than 150,000 votes.

It is the first time that three women from the North of Ireland have been returned to Strasbourg as MEPs.

Alliance Party leader Naomi Long said people didn’t vote for her expecting her to be a unionist or a nationalist.

“I said very clearly in this campaign I was neither, but I was willing to represent those from across the spectrum who wanted to remain in the EU,” she said.

He said that in this election, the SDLP would have needed unionists to vote for the party.

“That didn’t happen this time,” he added.

Martina Anderson said after being elected at the fifth stage: “The people of the north rejected Brexit by returning two remain MEPs and we sent a strong message to the EU.”