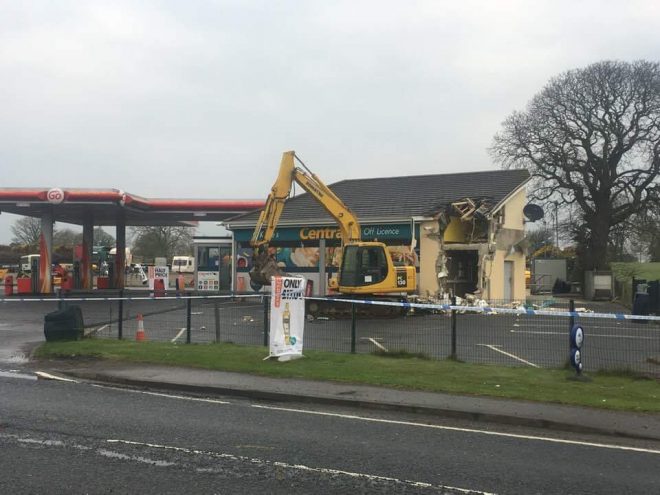 THE owners of a Co Derry petrol station target in the early hours of this morning have been forced to close up shop until further damage.

In a message this morning on Facebook, the owners of the filling station said: “Due to the unfortunate events of last night, we cannot open the shop to the public until further notice

“This happened on Sunday morning at 4:15 am.

“If anyone has any information regarding the vehicles, it would be much appreciated

Police have appealed for information from the public in a bid to identify the thieves.

Detective Inspector Richard Thornton said: “Unfortunately, the public and the business community are today waking to the news that another ATM machine has been stolen; that another business has been targeted by these brazen thieves.

“The theft from the filling station on Feeny Road was reported to us just before 4:30am.

“A digger, believed to have been taken from a site a short distance away, was used to rip the machine from the wall at the side of the shop leaving substantial damage to the building.

“On this occasion, the digger was not set alight and was located at the scene.

“I want to appeal to anyone who was in the area and who may have witnessed the theft, or who saw the digger being driven to the scene, to contact us.

“I would also appeal to anyone who saw any suspicious activity in the last few days in the area to call us.

“If you have information which you believe could assist our investigation please, pick up the phone and call detectives on 101, quoting reference number 357 of 07/04/19.”

Detective Inspector Thornton said the theft this morning is the eighth ATM theft this year.

He added: “As in all of these ATM thefts, the actions of these criminals have not only caused immediate financial harm to the business targeted, but they have understandably caused fear in the community and impacted upon a vital service many local people rely on.

“We are doing all we can to catch the people responsible – it is a key priority for us – however, I want to reiterate that the key to stopping these crimes and getting ahead of these criminals is information from the public.

“We need people to report anything suspicious, including seeing any unusual activity or people in areas close to ATMs.

“For example, if you hear machinery late at night or in the early hours please let us know.

“If you see any cars being driven in a suspicious manner close to where ATMs are located, please let us know.

“No matter how insignificant you think it is, call us and we will investigate. It could be key to catching the criminals responsible.”