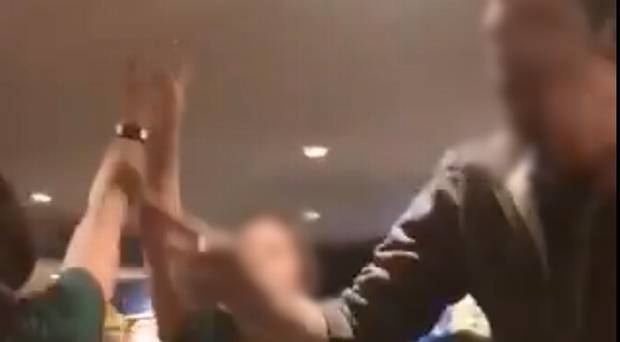 Fans in a Belfast bar chanting ‘We Hate Catholics’ on Sunday

AN AMATEUR league football club has apologised for “the obvious offence” caused to Catholics after sectarian singing emerged in an online video.

During the footage filmed on Sunday, a number of people are captured singing, “We hate Catholics, we hate Roman Catholics” to the tune of Tiffany’s I Think We’re Alone Now.

Castlederg-based Killen Rangers FC has issued a statement on Facebook saying it was aware that some club members were present in Belfast for the Northern Ireland match.

The statement said the club would meet to address the matter and would issue disciplinary sanctions if deemed appropriate.

The amateur league side said: “A video has emerged on social media which we wish to address as a Club.

“Members of Killen Rangers Football Club are present in Belfast for the Northern Ireland match.

“Sectarian chanting is clearly audible and we wish to firstly condemn this behaviour without hesitation.

“Such despicable antics have no place in sport, in society or indeed in life.

“Those who know us or who have had any dealings with our Club will be aware that we have been doing everything in our power for the best part of a decade now to make our Club more attractive to all sides of the local community.

“This work is ongoing and we have no intention to withdraw from this pathway due to a minority of individuals who really should have known better.

“As a Club we will meet and address this matter in line with our Club policies and Constitution.

“If disciplinary action is deemed appropriate then the necessary sanctions will be taken without hesitation.

“As a Club we wish to unreservedly apologize to the Catholic Community for the obvious offence caused, and again emphasize that this incident goes completely against the ethos of our Club.”

The IFA has said fans caught singing “we hate Catholics” will be banned from future Northern Ireland matches if they can be identified.

esponding to the video, the IFA said it was “utterly wrong and we condemn sectarianism in any form”.

The organisation, which has worked hard on its Football for All campaign to stamp out sectarianism, later said it would work to ensure those captured in the video are prevented from attending future Northern Ireland matches.

“The Irish FA condemns sectarianism of any kind,” a spokesperson said.

“The chanting in the video was wrong and if those involved can be identified, the association will work to ensure that they are prevented from getting tickets for Northern Ireland matches.”

A PSNI spokesman also said: “police are aware of a video circulating online. Enquiries are ongoing.”

Derry Sinn Fein councillor Christopher Jackson has called on the IFA to stamp out sectarianism in local soccer.

“The IFA have rightly condemned the actions of these so-called supporters but they also need to ensure that stringent steps are taken to identify and punish those involved,’ said Cllr Jackson.

“They should be banned by the IFA and reported to the PSNI.

“Sinn Féin have been in contact with the IFA and my party colleague, Councillor Claire Canavan has reported it to the PSNI to stress that there should be zero tolerance to such disgusting displays of hate.

“There can be no place for this in sport. It is a hate crime and every possible step should be taken to stamp it out.”