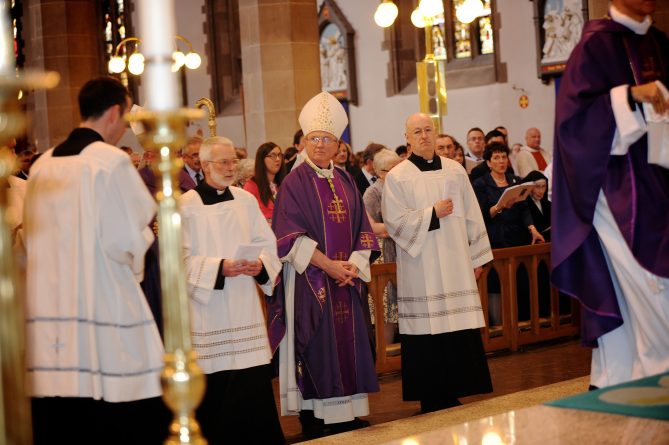 THE Catholic Bishop of Derry, the Most Reverend Donal McKeown, has said fewer Masses may not be a negative development as priest numbers across Ireland fall.

Bishop McKeown’s Derry diocese straddles the border, including the Inishowen peninsula in Co Donegal as well as Co Derry.

He said: “In many ways there are far too many Masses, with the size of the buildings that we have and the numbers of people that are there.”

The focus must be on “ensuring that we have a number of good high-quality well-prepared liturgies that welcome people and include people. So we don’t need as many Masses”.

His remarks follow a warning by Bishop of Ossory Dermot Farrell that the number of priests in his diocese in the Republic aged under 75 will fall by half, from 40 to 20, in the next 10 years, causing a reduction in Masses.

“The places in the world where the Church is thriving and growing are those places in Africa and Asia that didn’t have a glut of clergy two generations ago,” he said.

“They are thriving precisely because of far fewer priests.

“We have to stop lamenting an old model that arose in almost a pre-literate age where no one in your parish could read except the master and the doctor and the priest.

“In most congregations now, you could have a PhD sitting in front of you.

“We have to find creative ways to move forward rather than telling a miserable story that all is declining.”

Bishop McKeown was optimistic because his diocese had a wellspring of positive people who were proud of their faith, with strong lay organisations doing pastoral work.

He said a key part of the local diocesan plan “is building open and welcoming communities in a context where there is so much loneliness and fragmentation of relationships”, as well as suicide and addiction.

Nationally, a ‘neo-liberal’ model of society was causing many problems, he said, adding that people need to help “get some balance back rather than have this turbo-capitalism ravishing the place and destroying lives”.

Derry Bishop says fewer Masses due to priest shortage may not be bad thing was last modified: March 19th, 2019 by John