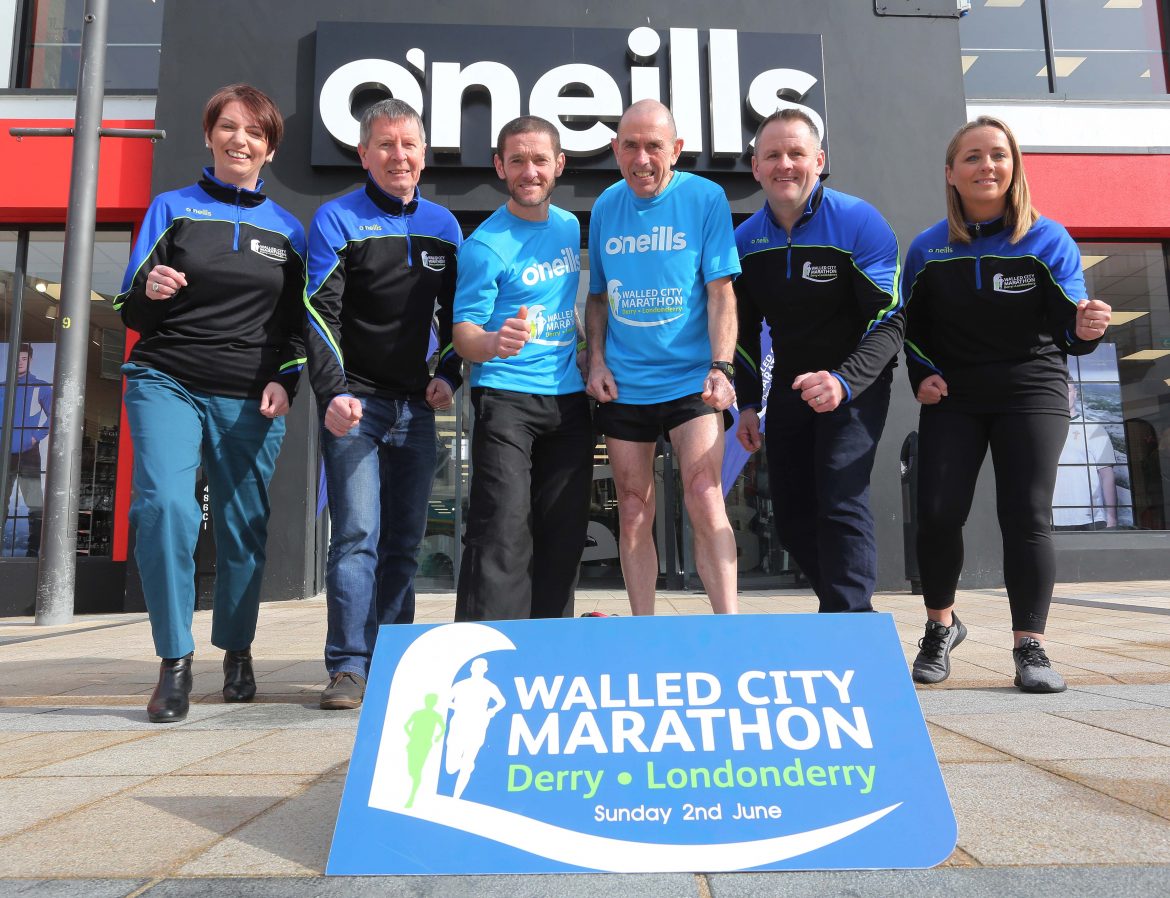 SPORTSWEAR giants O’Neills have today been announced as the new headline sponsor for the prestigious Walled City Marathon which will take place on the banks of the River Foyle on Sunday, 2nd June 2019.

Athletes from Ireland, the UK, Europe and overseas arrive in Derry/Londonderry each year to compete over a stunning 26.2-mile course in the historic Walled City. This year’s competitors will be sporting newly branded attire designed and manufactured at O’Neills’ state-of-the art production facility in Strabane.

Scott Galbraith, Event Director, said the organisers were delighted to have secured O’Neills as main sponsor for the marathon which is expected to attract an estimated 1,500 entrants again this year including past winners such as Kenyan athletes Dan Tanui who set a new course record last year, and Freddy Sittuk, together with an impressive field
of top local athletes.

Officially welcoming O’Neills on board during a photo-call to launch the exciting new event sponsorship at their Derry superstore in Waterloo Place, Mr. Galbraith said:

“We are delighted to have a new headline sponsor of the calibre that O’Neills brings to the Walled City Marathon going forward this year.

“As an internationally recognised sportswear brand, O’Neills are literally part of the fabric of the sporting community not just here in the north west where they are also a significant local employer, but across the island of Ireland and indeed throughout the world.

“We are very excited to be availing of O’Neills’ locally based global expertise and passion for a range of competitive sports including athletics in particular, which we will be showcasing to an even wider audience at this year’s Walled City Marathon on 2nd June.”

Kieran Kennedy, Managing Director of O’Neills, said the company which opened its new Derry superstore in the heart of the Walled City last year, was also delighted to come on board as main sponsor for the popular marathon this year.

He said: “Given the widespread popularity and success of this event year on year, we are extremely pleased to be adding the backing of the O’Neills’ international brand to the Walled City Marathon this year. We are looking forward to welcoming the runners and their families to our superstore in Waterloo Place to collect their race packs prior to the event and on the day itself for the prizegiving celebrations.”

Founded in 1918, O’Neills Irish International Sports Company Ltd now employs over 900 people with manufacturing plants in both Northern Ireland – most notably in Strabane – and the Republic of Ireland, and sales offices throughout the UK, France and Australia.

Veteran athlete Tommy Hughes, who won three Derry marathons and was special guest at the photo-call, said he too was delighted that the event had gone from strength to strength.

The Lavey man and Termoneeny RC ace who has competed all over the world, won the Derry marathon in 1984, 1985 and notably in 2013 when the event was relaunched as the Walled City Marathon during UK City of Culture year.

Hughes, who has chosen the Rotterdam marathon on 7th April for a new record attempt, said: “I have very fond memories of the Derry marathon through the years and continue to maintain close interest in the event, particularly through my fellow athletes at Termoneeny.

“I would like to extend my very best wishes to everyone involved with this year’s event and all those taking part on 2nd June and in the years ahead.”

Project Africa’s Dan Tanui set a new course record of 2:19:44 last year when he won the popular event for the second year in a row. Heather Noone from County Mayo and living in London, won the women’s race, running her first marathon in three hours and five minutes.

The Walled City Marathon takes place on Sunday, 2nd June 2019, starting from the Everglades Hotel on Victoria Road at 8.30am.

Entries are limited to 1,500 places and runners are encouraged to register as soon as possible. The entry fee is £50 and all competitors receive a bespoke Walled City Marathon Medal, t-shirt and goodie bag at the finish line.