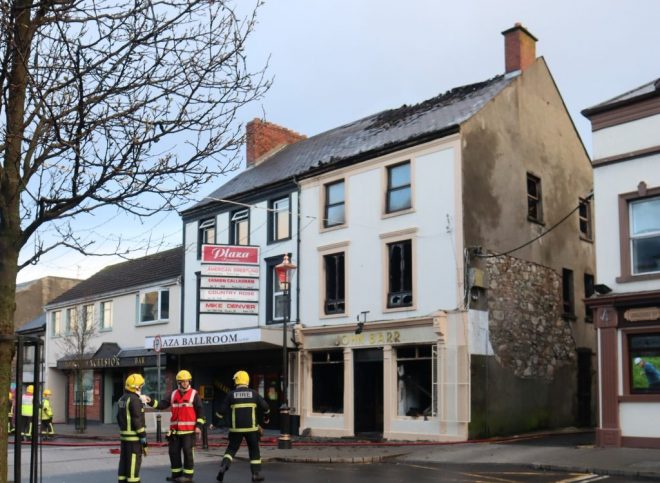 The full extent of the fire which badly damaged two buildings on Buncrana’s Main Street. Pic by North West Newspix

FIRE and Rescue crews from Derry were involved in tackling a blaze at a ballroom in Buncrana last night.

John Barr’s drapery store and the Buncrana Plaza were gutted by flames in the fire which broke out after 9pm on Sunday night.

Six fire units from Donegal and crews from Derry battled the blaze through the night, with over 60 fire fighters in action at its peak.

The fire was eventually brought under control and the scene is blocked off today for examinations.

No injuries were sustained in the incident.

But the community of Buncrana has been left reeling following the major fire which destroyed two iconic buildings on main street.

Commenting today, Cllr Jack Murray of Inishowen MD said that the situation could have been much worse without the massive efforts of the fire service.

Cllr Murray said: “I have to commend the fire fighters for all they did last night. I was at the scene at 8am this morning and there were fire fighters who were there since 9pm. If it wasn’t for them this would have been much worse.

“The Plaza building goes so deep back down from the street that the fire nearly reached the Tyre Centre behind it. If that went up this would have been a much worse situation.”

Fire and Rescue Group Commander William Johnston said: “Because of the extent of the fire there was a need for a substantial resource from Northern Ireland.

“Obviously we are intent on life saving and helping our colleagues saving property also and that’s why we sent such a large resource.”

Firefighters remained on the scene on Monday and part of the town centre remains closed while the scene is examined to determine the cause.