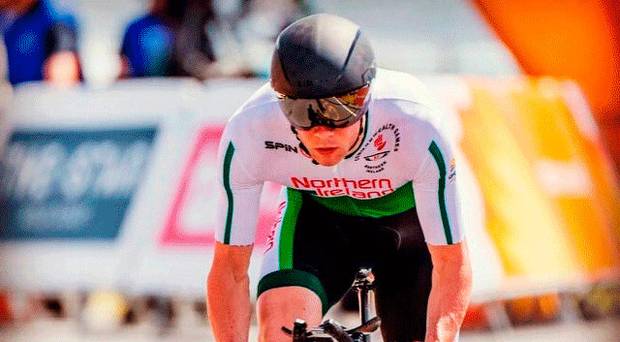 A DERRY cyclist has set his sights for 2019 on claiming the World Hour Record -cycling’s most prestigious record.

Marcus Christie heads to Colorado in the US next week to start intensive training as he bids to eclipse the world record set by Sir Bradley Wiggins in 2015.

The record, set by Olympic gold medallist and former Tour de France winner Wiggins, stands at 54.53km in one hour.

He will spend the next six months in high-altitude training under two of the world’s top cycling coaches before attempting the record this summer in either Mexico or Switzerland.

“I might not be a big name in world cycling right now and I’ll be coming at this as an underdog, but I know I can do it,” he said.

When he arrives in Colorado’s US Olympic training base early next week, he’ll begin his endurance training with international track coach Andy Sparks – an American who was previously part of the Cycling Ireland coaching set-up – and Heiko Salzwedel, a former British Cycling coach regarded as the man behind Team GB’s male team pursuit gold medal at the Rio Olympics.

Salzwedel was also credited by Sir Bradley as being instrumental in his record-breaking hour record ride in 2015.

“From the moment I approached these two legends they were on board,” Marcus said.

“And that really is the key – having people who believe in you, especially when nobody else does.”

Sparks helped Co Down star Martyn Irvine win his world title back in 2013 in Minsk.

“Heiko is like the godfather in cycling,” Marcus said. “There’s nothing he hasn’t achieved and he has coached many of the greats. I’m eternally grateful to have him in my corner.”

And Marcus says He is “super excited” to get started.

“Going up against Wiggins’ record is what dreams are made of,” he said.

“I know he’ll be watching on and there are a few other riders who have said they might try to break the record this year.

“Hopefully I’ll get there first.”

The attempt is largely being self funded with Sparks helping Marcus out with accommodation.