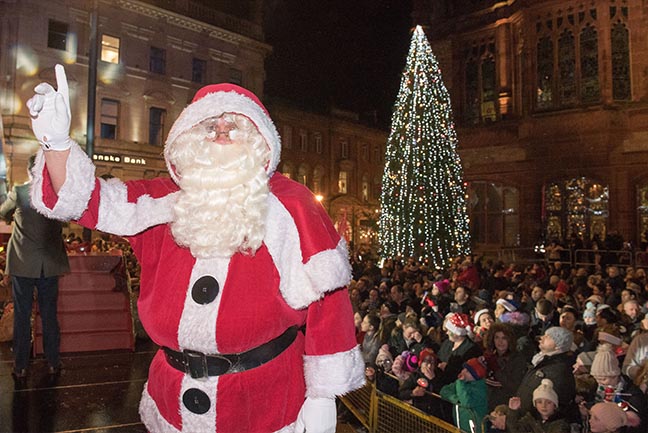 City to kick off Christmas in style with festive switch on

THE Derry Christmas Lights switch on, the traditional start of the city’s Christmas celebrations, will feature a host of festive music and popular pantomime characters when it takes place in the city centre on Thursday November 22nd from 6pm – 8pm.

Musical performers in Guildhall Square will include George Hutton and Paul Casey, and the St Oliver Plunket Primary School Choir while Superstition will perform in Waterloo Place

The entertainment will also include characters from the Millenium Forum and Waterside Theatre’s pantomimes and the whole event will be broadcast by local Youtube sensation Adam B – a young man with a worldwide online following of over 1.5 million people.

Santa Claus is scheduled to appear on both stages and will perform the official switch on along with Mayor of Derry City and Strabane District Council, Councillor John Boyle, who encouraged the public to get involved in the night’s entertainment.

“The Derry Christmas lights switch on is a night packed with entertainment for all the family and an ideal way to start the festive season,” he said.

“It’s always an exciting night to see the city lit up and ready for Christmas for the first time and Council’s maintenance and electrical teams are currently hard at work installing the city’s network of illuminations for the big night.

Family themed entertainment will be hosted in the Peace Garden from 4pm – 6pm where youngsters can come and visit the Enchanted Garden and meet Santa’s Sleigh and Reindeers, get their face painted and meet some Christmas themed characters.

Foyle Street Bus Depot will also be hosting arts and crafts where children can create a decorative bauble to hang on the Christmas tree and there will be Reindeer food available in bags to take home.

The city lights switch on is just one of the highlights in Derry City and Strabane District Council’s exciting programme of festive events for 2018.

Mayor Boyle will host his own Christmas initiative when he invites youngsters to step into the majestic wonderland of Santa’s Christmas Workshop in the Guildhall with story-telling, Christmas crafts and an appearance from the man himself, Father Christmas.

City to kick off Christmas in style with festive switch on was last modified: November 17th, 2018 by John