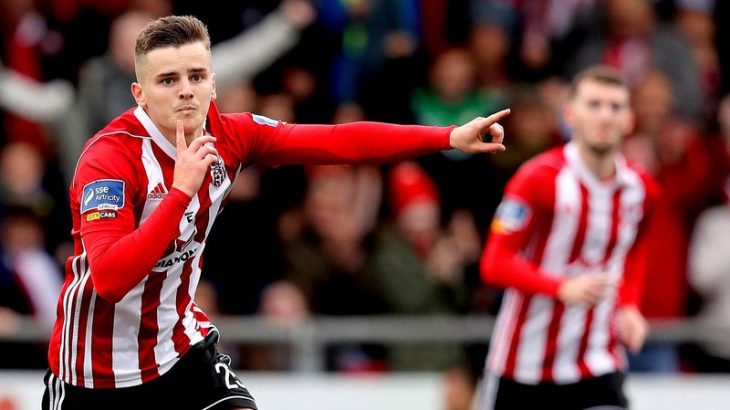 RONAN Hale produced a rare moment of quality to hand Derry City a win as the Candystripes overcame the Blues in Limerick.

The win keeps Derry’s hopes alive of qualifying for Europe next season with three league games to go.

The Birmingham City striker looked the only player capable of producing a goal in a game that was hard to watch for the small number who turned at Markets Field to watch the match (kick off 7.45 pm) which helped end Derry’s losing run.

With Derry City having lost five on the spin, Limerick having lost four of their last five league clashes and neither side having anything to play for this season – this game had very little billing to live up to.

Team news didn’t enthuse the miniscule crowd either as the hosts named a starting XI without an established striker.

Indeed, the absence of Ellis was one of only two changes in the Blues side – with Will Fitzgerald occupying his number nine berth. Colman Kennedy replaced Killian Brouder in the other switch.

The Candystripes made four changes from their 3-2 defeat to the champions elect Dundalk – with the suspended Kevin McHattie, Rory Hale, Adrian Delap and Ali Roy all making way. Dean Shiels, Ben Fisk, Nicky Low and Danny Seaborne were their replacements.

These sides sides had met 15 times in the league since Limerick’s promotion in 2013, with Derry managing to outscore the Blues by 33 goals to six in that spell.

And without any obvious goal threat in the Limerick side, it seemed obvious from an early stage who would offer more in front of goal.

Tommy Holland was the foil for Hale in the opening 20 minutes though. Twice the Birmingham City frontman tested the young Blues stopper and twice he was denied.

It would be a case of third time lucky, however. After the hosts put together their first real move of the game, they would be caught out from the restart.

Limerick switched off and Nicky Low was in an acre of space in midfield. He took a couple of touches before freeing Hale down the left channel.

Hale took a touch and fire low into the far corner to notch his eighth of the season in the league – it was fully deserved, too.

Next for Derry City is an away trip next Friday night to bottom of the table side Bray Wanderers.

The Candystripes last two games are a home tie against Cork City on Friday, October 19 and their final game of the league is away match against St Pat’s on October 26.