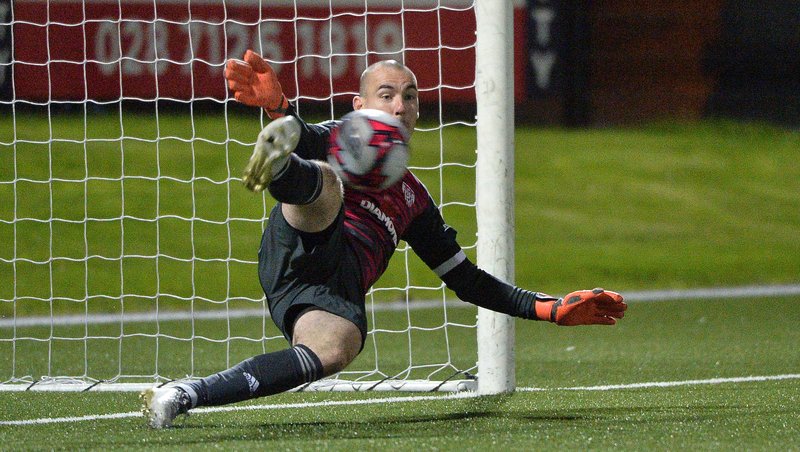 AFTER the disappointment of last week’s 2-1 defeat in the SSE Airtricity Premier Division, Derry City were hoping to put that game behind them and progress in the FAI Cup.

And on 80 minutes, Adrian Delap put a smile back on the faces of the fans and manager Kenny Shiels when he scored the only goal that secured a win over St Pat’s in the second round of the Irish Daily Mail sponsored competition.

But the game was not over, and in the dying seconds of injury time birthday boy and City keeper Ger Doherty was on hand to make a fantastic penalty save, denying St Pat’s an equaliser and a replay.

The game at the Brandywell (7.45 pm kick off) was the only all Premier Vision tie in the competition.

The Candystripes appeared to be cruising into the last eight thanks to Delap’s goal ten minutes from time.

But the home side struggled to see out the tie as St Pat’s came chasing an equaliser.

The nerves were jangling in the Brandywell stands when the official announced there would be five minutes of added time.

Former Derry player Simon Madden was fouled in the 95th minute and the referee awarded a penalty.

But Doherty – who was magnificent against Waterford last Friday night with a succession of shot stops – brilliantly saved Ian Turner’s effort with an.

Derry should have taken the lead on 37 minutes when a burst forward by Jamie McDonagh left Pat’s short on numbers at the back and he cut inside before sending Aaron McEneff through on goal.

McEneff was on his unflavoured left foot and it showed as he shot straight at Clarke.

The goalkeeper had to be alert within seconds as Rory Hale tried his luck, forcing him to tip the ball over the crossbar with an effort from the edge of the area.

Derry had a real chance to break the deadlock on 55 minutes when McEneff’s corner was met by Seaborne, who headed the ball back across goal, sending Madden into a tailspin with the ball bouncing against his elbow.

Penalty appeals were dismissed by referee Neil Doyle and play continued but Darren Cole was unable to turn the loose ball in from close range.

The deadlock in this tense cup tie was finally broken with with a bizarre goal.

Aaron Splaine burst through two challenges in the centre of midfield and raced forward before attempting to play Delap through on goal.

The youngster was wiped out in the area but, with the whole Brandywell roaring for a penalty, the ball somehow went past Clarke and into the net.

Then came the late drama with Turner sending his penalty effort down the middle but Doherty left a trailing leg, which proved to be the very final act of this absorbing cup tie.