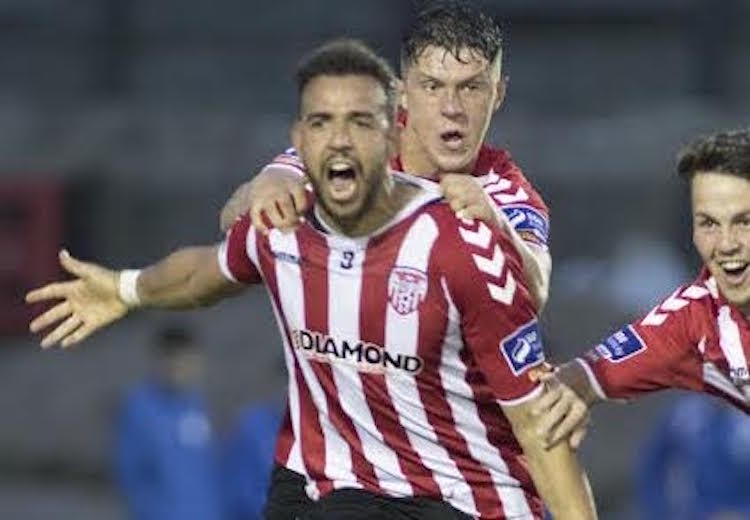 Darren Cole insists European dogfight not over yet

DARREN Cole insists that Derry City are not giving up on European football for next season despite the Candy Stripes being eight-points behind third-place Waterford – following a narrow 2-1 defeat to the Blues on Friday night.

The defeat was a huge blow for Kenny Shiels European hopes for next season – a feat he has managed with the club in the consecutive seasons prior.

However, the senior defender believes a few victories for City in the coming games could see them right back in the European race.

“No, it is one of those things, there are still a few games to go and we just need to keep picking up points and expect to win the next couple of games.

“In the last few games, you don’t where results can go, they can go your way. So, we just need to keep going and be up for every game,” he said.

A victory for Derry City on Friday would’ve seen them climb to within a point of Shamrock Rovers – who lost the Dublin derby on Friday – and also have a game in-hand.

But the Scot, 26, insisted it wasn’t a lack of desire that caused City to fall to their eleventh defeat in 16 league games since May – collecting only 13 points from the 48 on offer.

“We knew that they were a hard side, and have strength in the middle of the park, who are really determined, so we struggled,’ Cole said. ”I think conceding that early goal and the goal before halftime really changed everything.

“I wouldn’t they were more up for it, but I just know that they are a more direct side and will play forward.

“We try and play from the back and tonight it didn’t suit us because they pressed us.

“You could see in the last five or ten minutes how much it meant to us, everyone was throwing themselves on the line, but we should have been doing that from the start and hopefully against St Pats next week we can get the win.”

The former Rangers, Livingston and Greenock Morton player has been somewhat of a makeshift player at times this season, but Cole admitted he was happy to be playing football.

Despite Derry’s lack of stability in league form this season, Shiels’ side have done extremely-well in cup competitions – with an F.A.I second-round tie against St. Patricks Athletic on Friday night and an EA Sports Cup Final against Cobh Ramblers to look forward to on September 16 at the Brandywell.

“It always good to know that you have got those games in there, but as I’ve said, we are going to try and push for the European spot,” he said. “I know it’s hard but we have to look forward.

“I think when we put a couple of wins in a row and have a starting eleven we could build on that and things could be different.”

Darren Cole insists European dogfight not over yet was last modified: August 21st, 2018 by Shaun Keenan