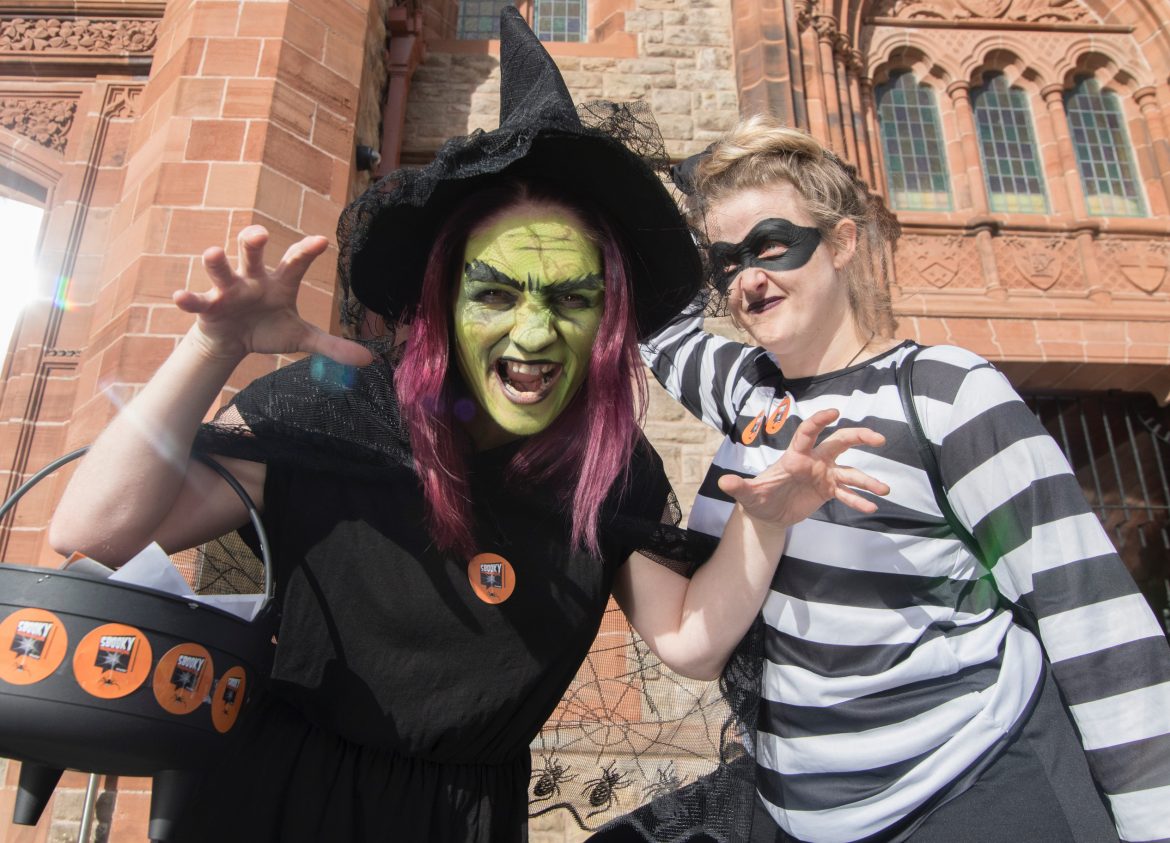 Scaring up a storm at the launch of the Haolloween Festival in Derry are Claire and Tara Harkin. (North West Newspix)

DERRY’s ancient Walls became a sea of pointy hats yesterday evening as a coven of hundreds of witches came together to launch the programme for this year’s world famous Halloween celebration in the city.

The 2018 event will run from 26th October – 3rd November 2018, with over 100 family friendly activities at more than 40 venues, stretching over eight jam-packed days.

The theme for this year’s Carnival Parade is Return of the Ancients, looking back to the Pagan origins of Hallowe’en which reach far back to the times of Cúchulainn and Fionn MacCool and beyond.

Launching the event, the Mayor of Derry City and Strabane District, Councillor John Boyle, said the gathering of witches perfectly conjured up some of the magical atmosphere which has made Derry Halloween renowned across the world.

“I was delighted to see so many people donning their pointy hats and hopping on their broomsticks to join in the launch.

“It really captures the true spirit of the event which has always belonged to the people of this city who go to such great lengths to put on a show every year.

“This year we also celebrate 400 years of the City’s magnificent Walls which play such a key part in our celebrations and we can look forward to another spellbinding celebration and an extended festival with plenty for everyone, young and old, to enjoy.

“Be warned, accommodation always gets booked up fast, so anyone travelling should plan their trip now.”

Among the regular highlights which draw thousands to the city each year, is the Awakening of the Walls, which makes a welcome return for 2018.

As we celebrate four centuries since the building of the city’s stunning ramparts, watch as they come alive with an illuminated animation trail on and around the City Walls from October 28-30.

Scary families, Michelle McBrearty and children Aiobheann and May with Kelly Downey and Alex and friend Mary Kelly at the launch of the Derry Halloween Festival. (North West Newspix)

The Guildhall will once again be at the centre of the celebrations with the magical Museum of the Moon bathing the Main Hall in its ethereal light for seven days, and where the Samhain Sessions will showcase some fantastic musical talent under its ghostly glow.

Up to 1000 people will be taking part in the carnival parade which is always the main highlight of the programme and a mass community celebration for all.

Following the spectacular carnival celebrations and fireworks finale on October 31st, just when you thought it was all over, on November 1st the Walls will once again become the setting for First Light, which will bring the community together for a special celebration of light, remembrance and renewal.

Add to this story-telling, ghost tours, the Jack-O-Lantern Festival, the Monster Funfair, Little Horrors, Shape Shifter costume and make up workshops and the haunted Harvest Market, and you have the secret formula for the best Halloween celebration in the world.

Looking ahead to the event, Festivals and Events officer with Council, Liz Cunningham, said: “Thursday night’s gathering of witches gives just a hint of what’s to come, and really shows how much the people of the city have made this celebration their own. “We are thrilled that so many wicked witches turned up for some fun this evening. This year we’ve extended our programme, making it our biggest celebration to date, and we just look forward now to showing the world how it’s done.”

You can find out more about all the spooktacular celebrations on derryhalloween.com or follow @DerryHalloween on social media #DerryHalloween