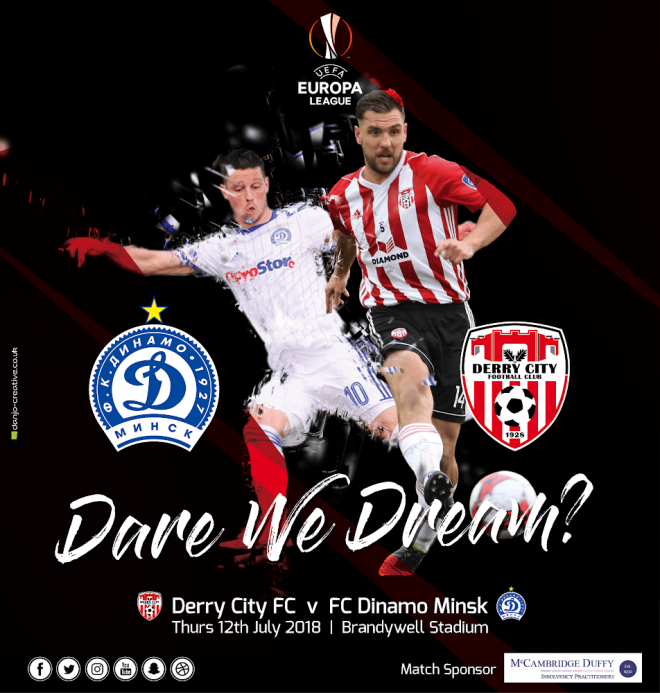 KENNY Shiels has sent out a heartfelt rallying call ahead of Derry City’s Europa League tie against Dinamo Minsk at the Brandywell on Thursday night, July 12 (kick off 6 pm).

The City boss had his say on recent events when a banner was unfurled during Friday night’s home game with Limerick by insisting “the players and staff at Derry City are working class too”.

It follows calls from fans to boycott the crunch Europa League game because of the £25 ticket prices.

“We’re returning to the European stage tomorrow night and that’s a very positive occasion for the whole club. We have new players in and a very young squad who have worked so hard to get us here,” said Shiels.

“They need our supporters tomorrow night; we all do.

“I sincerely hope that every single person who is able to, will come to the game tomorrow night and back us.”

Shiels has a couple of injury concerns ahead of the game but is delighted that his new players are available to play.

“Nicky Low is definitely out and Gavin Peers is a doubt but the new lads who have come in will all make the squad.”

“Thankfully it is different this season than last- the first game is a bit later this time so players signed early in July are available.

“While we will miss Nicky’s quality and energy in the middle of the pitch, I think we have good cover now that the new players have come in.

“Ally (Roy) and Aaron (Splaine) fitted in really well against Limerick at the weekend and Ben Fisk has looked really lively in his games so far.

“Dean Shiels will come into the squad now as well so I hope that will give us some options that we may have been missing.

“Dinamo Minsk are a quality side and we definitely have our work cut out in both games.

“I will be asking a lot of the players to ensure that we do everything we can to make this a memorable occasion.”

“I just really hope that our supporters do everything they can to back us.”