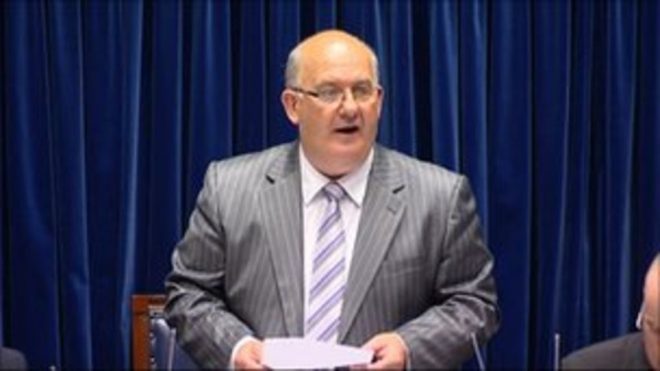 Baron Hay of Ballyore served as an MLA for Foyle from 1998 to 2014 and currently sits in the House of Lords.

Lord Hay was born in Donegal in 1950 but has lived in Northern Ireland for the vast majority of his life.

He has been told that if wants a British passport he will have to undergo the naturalization process at a cost of £860.

After the Republic left the Commonwealth in April 1949, people born in the Republic are no longer entitled to British citizenship or passports.

The DUP have campaigned for Lord Hay and those in a similar situation to be granted citizenship for a number of years but have proved unsuccessful.

Mr Campbell confirmed that the party have written to the Home Office in an attempt to resolve the situation after speaking on the issue at an Northern Ireland Affairs Committee meeting in Westminster.

“Irish passports are widely available in Northern Ireland, people who have never even been to the Republic can apply for and get an Irish passport,” the East Londonderry MP said.

“Because our Government haven’t reciprocated people who have been born in the Irish Republic but lived here for sixty years in Lord Hay’s case, and there are thousands of others who have lived here, paid tax to HMRC, vote here but the only way they can get a British passport is the naturalization process.

“If they keep saying they are going to uphold the Belfast Agreement then part of that Agreement says that they will allow people to choose their own identity.

“If the the Irish Government are prepared to give full citizenship rights to people in Northern Ireland why can’t the British Government offer British Citizenship to people who regard themselves as British in every possible way apart from the fact they were born on the wrong side of a land border nearly 70 years ago.

“They keep telling us its an anomaly and we are saying to them ‘fix this anomaly’. It’s as simple as that.”

Mr Campbell said that he felt that though there may be some reluctance to change the law it had to be changed to recognise people’s rights as guaranteed in the Good Friday Agreement.

“I suspect there are some people in the Home Office who are reluctant, as they would see it, to open a Pandora’s Box,” he said.

“This is people who are UK residents, people who can prove they have had an address here for many years. They are UK citizens in everything but the nationality sense.

“Either they adhere to what it says in the Good Friday Agreement or they tear up the Agreement but they can’t have it both ways. It’s an issue of equality.

“You can imagine what would happen if the shoe was on the other foot.

“If there were politicians in Sinn Fein or the SDLP who needed a passport and others were saying that people in Northern Ireland had lesser of a right to apply for an Irish passport.”