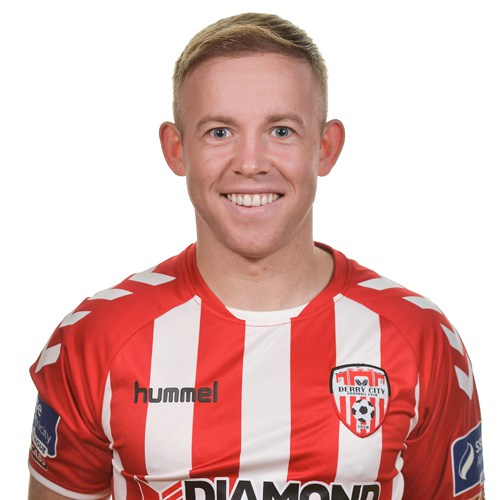 Midfielder Nicky Low got Derry’s only goal against Bray

DERRY suffered defeat a 2-1 tonight to lowly Bray Wanderers, leaving them in fourth place, five points off leaders Dundalk but with a game in hand.

It means the Candy Stripes have dropped four vital points in their challenge for the SSE Airtricity Premier Division.

A well-taken brace from Ronan Coughlan gave bottom side Bray Wanderers a rousing win at the Carlisle Grounds as they ended City’s nine-match unbeaten run in the SSE Airtricity League Premier Division.

With Martin Russell, set to be officially unveiled as manager next week, again watching from the dugout, Bray deservedly got their second victory of the season to move to within six points of ninth-placed Limerick.

Bray enjoyed some early pressure with Derry goalkeeper Ger Doherty keeping his eye on the ball well in the bright sunshine to trip over a Cory Galvin cross for a second home corner inside two minutes.

The first real chance of the game from another corner but was wasted by Bray six minutes later.

Central defender Sean Heaney stole in at the back post only to slice his shot from Kevin Lynch’s delivery back across the area with the goal gaping.

Wanderers maintained the initiative as Derry, with Rory Hale, Nicky Low and Aaron McEneff struggling to get on the ball in midfield, had to work hard to get out of their own half.

It took the sluggish visitors 31 minutes to register their first attempt on goal. Even at that it came from a speculative long range shot by central defender Darren Cole that, though well struck, was off target.

But Bray remained the better side as half-time approached.

The hardworking and inventive McCabe threaded a pass through for the run of Daniel Kelly who rushed his shot to blast it over the top.

Showing a little more impetus from the restart, Derry won a couple of early corners as they put the Bray defence under a bout of sustained pressure for the first time in the match.

All it produced, though, was a drive by Rory Patterson, from a Nicky Low corner, that was blocked by the impressive Hugh Douglas.

Bray survived and deservedly took the lead right on the hour mark.

Initially, Paul O’Conor’s flick from a Lynch corner was deflected out for a second corner.

McCabe whipped the ball in close to the goal where Coughlan headed home at the near post.

It was a lead that lasted just three minutes.

Conor McDermott did well on the right to cut across and pick out Low who teed his shot up to drill a crisp strike into the bottom corner from well outside the box.

Bray responded by continuing to play and were rewarded with the winner on 73 minutes.

McCabe did well to dribble past several defenders to lay the ball off to Dan McKenna.

His chip found Coughlan who controlled the ball off his body before shooting low to the net off his right foot.

Bray then defended doggedly to the death.

Rhys Gorman cleared off the line from John Cofie on 84 minutes before keeper Evan Moran saved a drive from fellow substitute Ronan Curtis right on the whistle.

City back in Europe after St Pat’s...