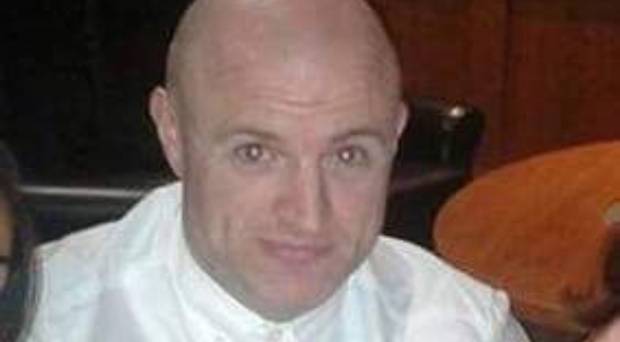 Karol Kelly brutally stabbed to death in Derry at weekend. Brothers Sean and Gary Anderson charged over his murder

A JUDGE ordered his courtroom to be cleared today during angry scenes as two brothers stood in the dock charged with the brutal stab murder of Karol Kelly at the weekend.

The 35-year-old was attacked during a fight involving a group of men in Grafton Street, Rosemount, at about 2.40 am on Sunday morning.

Despite the valiant efforts of paramedics called to the scene, the father of five children died in the back of the ambulance from multiple stab wounds.

Both men spoke only to confirm that they understood the charge and to confirm their names and dates of birth.

About 20 police officers were in court prior to their appearance and the hearing was temporarily delayed to allow for the arrival of police reinforcements.

Extra officers were called to the courtroom as friends of the victim and relatives and friends of the two defendants faced each other during the brief hearing.

One man carrying a photograph of the deceased was removed from the court.

Two other men were arrested for contempt of court.

Before the defendants appeared in court, District Judge Barney McElholm said he wanted to make “something very, very clear to the members of the public”.

“I realise tensions are running high, but I will not tolerate bad behaviour by any party.

“This is a necessary part of the court process and it will be conducted in a dignified manner. Anyone who does not do that risks an immediate prison sentence.

“I do not want this turning into a circus.”

However, his warning was ignored and as a result, District Judge McElhom ordered the court to be cleared as friends and family of Mr Kelly directed their anger at the two defendants.

An investigating detective told the court she could connect the defendants to the murder charge.

Under questioning from solicitor Kevin Casey, who represents both defendants, the police witness confirmed that PSNI inquiries had revealed the deceased had made a number of threats towards the defendants.

The detective inspector also confirmed that enquiries revealed that shortly before the incident that led to the brothers being charged, the deceased and another man, who is not before the court, had entered the family home of the two defendants and assaulted them.

The detective inspector said the defendant Gary Anderson had lost parts of two of his teeth as a result of being assaulted.

The officer also confirmed to the court that another male, who was along with Mr Kelly and who is not before the court, was arrested on suspicion of burglary with intent to cause GBH.

The detective also accepted that Mr Kelly made a threat to kill anyone who went to the police.

The Anderson brothers did not apply for bail.

The defendants were remanded in custody to Hydebank Wood Young Offenders Centre in Belfast.

They will appear in court again via video link on Thursday, March 29.