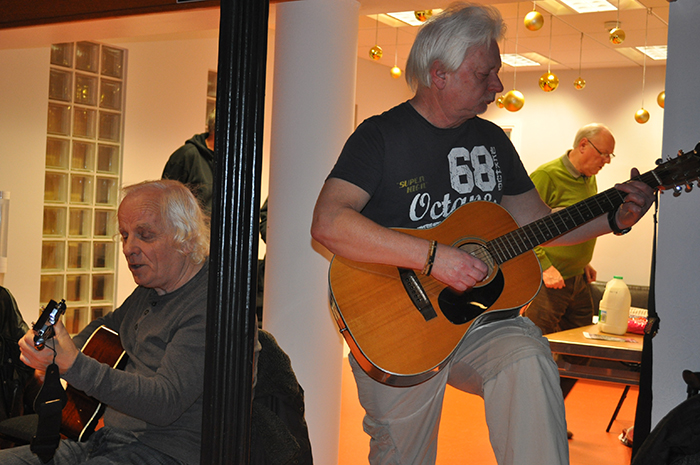 This has been a men only developmental music project offering an opportunity for individuals to hone their music skills and enjoy some male company with their peers – as well as gain confidence to accompany fellow musicians.

Thirty or so local guys have being working on music pieces of interest to them under the tutorship of professional musicians Mickey Joe Harte, Terry McCafferty and more recently Ronan Doherty.

Many of the ‘older’ guys have been engaging in the arts for the first time and is their first forte into the world of performance through the ‘Music to your Ears’ project.

While some of the men were beginners or amateur musicians, for others it has been about polishing or honing their skills and remembering tunes from the 60’s, 70s and 80’s.

Around this music, they have developed a story to link their song choices to Derry’s local history and what was important to them as lads growing up.

So the bands are now ‘back in town’ and they haven’t forgotten how to perform for the crowds – as the Cottage in the Craft Village can confirm!

The goal that the men have been working towards is a finale performance – ‘On the Road Again’ – for friends and families in The Playhouse on Friday 12th January at 8pm.

So it is still practice, practice and more practice, up until the big night in question when the men hope to take the audience on a walk down memory lane.

The Inner City Trust and media students from the South West Regional College also provided input and support to the project.

Praising the ‘Music to your Ears’ initiative which is about encouraging men to engage in the arts regardless of their previous experience, Mayor of Derry City and Strabane District Council, Cllr Maolíosa McHugh said:

“This is a fantastic project which importantly promotes better mental health and well-being.

“Indeed, many ‘older’ men throughout the city and district – not just those who are retired – are at risk of social isolation.

“It is therefore wonderful to see that the men have greatly benefited from this project – and that the informal, supportive environment has helped them combat a tendency towards isolation – whether as a result of the loss of a partner, family moving away or the weight of caring for loved ones.

“Music really does have an amazing power to unite people – and can reach, touch and inspire people of all ages.  It is therefore great to see the men working towards a shared goal – as well as sharing their talents on stage at The Playhouse!

“I am also delighted that through funding from the Arts Council the ‘Music to your Ears’ project in Derry and Strabane has been able to run for a second time – and that funding has also been secured to continue with this fantastic project.”

“Engagement in the arts is one way to reduce the very real issue of isolation of older people in our communities, particularly men.

“Not only does participation provide a platform to express identity and explore new talents, it also offers a way to meet people and have new experiences. It offers a voice for older people.”

The Mayor added that Council hopes the finale will be a great night for all involved and the men’s families who will enjoy seeing their dad or grandfather perform on a professional stage, many for the first time. Having got the music making bug the Mayor also hopes that the men’s involvement will encourage them to keep on playing and maintain the friendships already created through the ‘Music to your Ears’ project.

Tickets for the ‘On the Road Again’ show are £5 and can be purchased via The Playhouse Box Office 02871268027 or online at www.derryplayhouse.co.uk/events

For further information on the ‘Music to your Ears’ project contact Arts Development officer at Derry City and Strabane District Council Jean Smyth on 02871253253 Ext 4295.