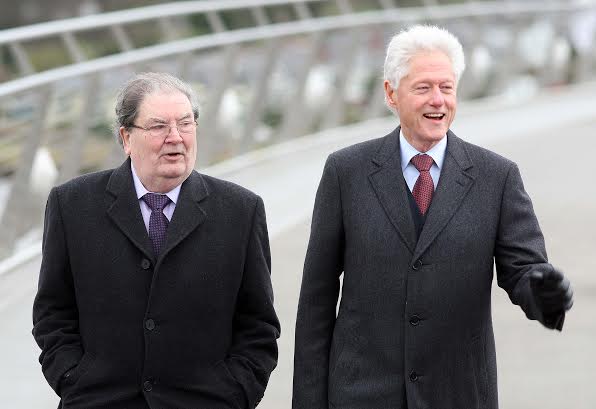 THE Northern Irish premiere of a film about former SDLP leader and Nobel Laureate John Hume’s efforts to secure peace is set to take place today.

‘In the Name of Peace: John Hume in America’ is narrated by Liam Neeson and focuses on John Hume’s work to secure the support of American presidents in ending conflict in Northern Ireland.

Speaking ahead of the screening, SDLP deputy leader Nichola Mallon said: “Next year marks 50 years since the first marches for Civil Rights set out from Coalisland to Dungannon and marchers were beaten and battered off the streets in Derry.

“In the year that marks the first steps in the ongoing movement for equality, rights and respect, it’s an important time to reflect on the contribution of John Hume to peace on this island.

“Like no other individual before or since, John Hume had the ability to rally presidents and prime ministers to the cause of peace in Ireland. His influence in America was critical to kickstarting and sustaining our fledgling peace process.”
The film was directed by Maurice Fitzpatrick, who said John Hume’s “intellect, imagination and deep humanity were the driving force behind the involvement of US congressmen, senators and, eventually, successive presidents in the Irish peace process”.

“Hume’s contribution, supported by public servants across these islands, facilitated a sea change in global attitudes to, and involvement in, the peace process.”

The advanced screening will take place tod day at the Kennedy Centre Cinema in Belfast before going on general release across Ireland on Friday.