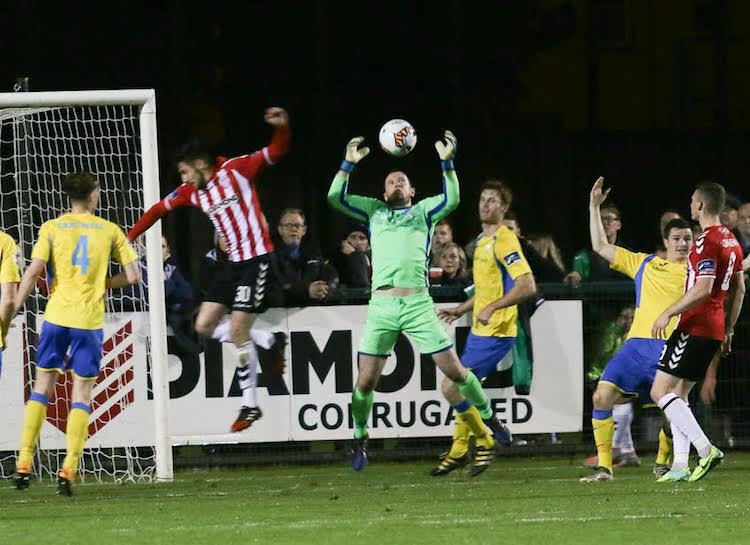 The 3-0 win keeps the Candy Stripes in touch with a chance of securing third place and European football next season as Shamrock Rovers drew against 1-1 against Sligo Rovers.

And the defeat has sent Finn Harps closer and close to relegation from the Premier Division.

Rory Patterson’s second half double, after a first-half opener by Ronan Curtis, means that the trapdoor is open and Ollie Horgan’s on its threshold.

In the end it was a comfortable win for Kenny Shiels’s side.who now have a six-point cushion over Bray in fourth.

Curtis had been on Republic of Ireland Under-21 duty this week, playing in the scoreless draw with Norway and a 4-0 win over Israel.

The St Johnston man showed his quality here with the opening goal in the 24th minute and it was the 21-year-old who created the second.

Curtis, who was the subject of a bid from Swedish club Ostersunds earlier in the season, had the maturity, after getting the better of Damien McNulty in the 56th minute, to cut across the area to Patterson who finished into the unguarded net.

Harps played like a side with their toes already tagged for the morgue, the weight of the meaning of this one – one of the most important derbies Harps have ever contested – dangling around them ominously.

After a 2-0 win at Limerick on September 1, Harps had safety within their grasp, but they’ve now lost four-in-a-row and relegation has arrived on their shoulders at the speed of knots.

The tone for a tasty derby was set when Harry Monaghan lunged in to catch Gareth Harkin with a boot that earned him a booking the Harps bench felt could have had an upgrade in colour. 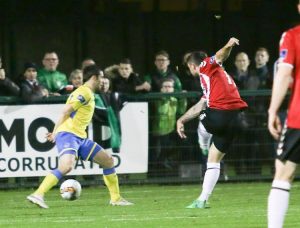 Tommy McBride, clearly charged up for a contest against his hometown club, went into the book for an over-zealous challenge on Barry McNamee soon after and a knife would’ve glided through the tension by the time City hit the front.

Curtis pinched McNulty’s pocked and he soared into the penalty area before brilliant firing beyond Ciaran Gallagher to ignite the fuse.

Curtis showed a ruthless and clinical edge once he crossed the chalk of the Derry penalty box with an emphatic swing of the left boot that gave Ciaran Gallagher no chance.

Doherty, a product of Derry’s youth set-up, was to the fore from his left-back berth in the early stages, first inviting a head from Schubert that came too late and with too much zip for the Austrian, and then teeing Rory Patterson up for a shot that careered off Kilian Cantwell,

By the time Ben Connolly blew for half-time, Eddie Dsane – cutting a growingly frustrated figure in the Harps attack – was yellow carded after he arrived late to challenge the rampaging Conor McDermott, whose forward forays on the right flank were a real feature.

Ethan Boyle’s season was ended in last Saturday’s 2-0 loss to Dundalk at Finn Park when he hobbled out of action with a hamstring injury, while Paddy McCourt suffered a reoccurrence of a hip ailment, although the former Celtic star – even though unable to partake in the warm-up – was listed among the substitutes.

Harps were also without Mark Timlin, unable to play against Derry City as the Buncrana native is only on loan from the Candystripes.

Without the probing of McCourt, Harps struggled to make inroads in the final third. As much as they mustered in the opening half was a shot by Danny Morrissey that deflected wide.

Harps did improve briefly after the break with Packie Mailey – back after a lengthy injury absence – flicking a dangerous header narrowly over before Harps were undone by Patterson’s brace.

In added time, Curtis might have had another, but Cantwell cleared off the line and Derry – who were able to introduce youngsters Evan Tweed and Sean McBride – kept the sheet clean.