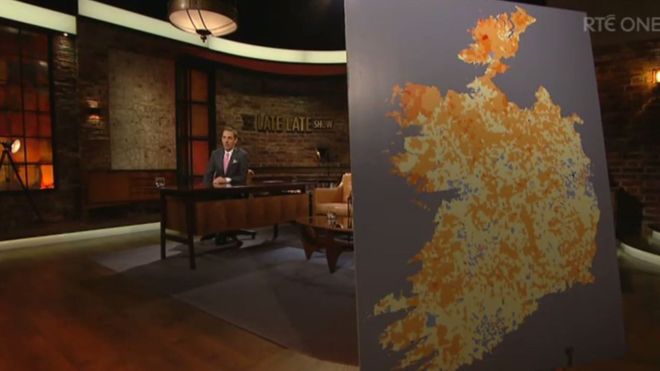 RTE APOLOGISES AFTER CUTTING NORTH OFF MAP OF IRELAND

RTÉ has apologised for cutting the North out of a map of Ireland on a recent episode of The Late Late Show.

Presenter Ryan Tubridy was talking to Dr Eva Orsmond about the correlation between location and mortality on 1 September.

The omission prompted more than 200 complaints, according to The Irish News newspaper.

RTÉ said the map, provided by a third party, “was not a geographical or political one, but a data map”.

However it added that the map “appeared to many as a geographical map and as such appeared disrespectful and distressing”.

SDLP Foyle MLA Mark H Durkan said he was “deeply offended” by the map which depicted the island of Ireland with the North missing..

Executive producer John McMahon apologised for the “upset caused to viewers both there and in the Republic”.

RTE said the blue in the map referred “to income status, not rivers or lakes as is normal”.

In a letter to complainants explaining the omission, RTÉ said the map reflected information gathered from the census carried out in the Republic of Ireland in 2016.

“As such it did not contain any data relating to the six counties and therefore that section of the map was blank,” said the broadcaster.

It said the graphic was “important” to show areas across the 26 counties where “social inequality and deprivation are having a serious impact on the life and life expectancy of communities”.

Mr McMahon said: “I fully accept that as presented, the map appeared to many as a geographical map and, as such, appeared disrespectful and distressing to you and other viewers.

“All I can do is assure you that it was not an intentional slight on our audience north of the border and I apologise for the upset caused to viewers both there and in the Republic.”

RTE APOLOGISES AFTER CUTTING NORTH OFF MAP OF IRELAND was last modified: September 13th, 2017 by John