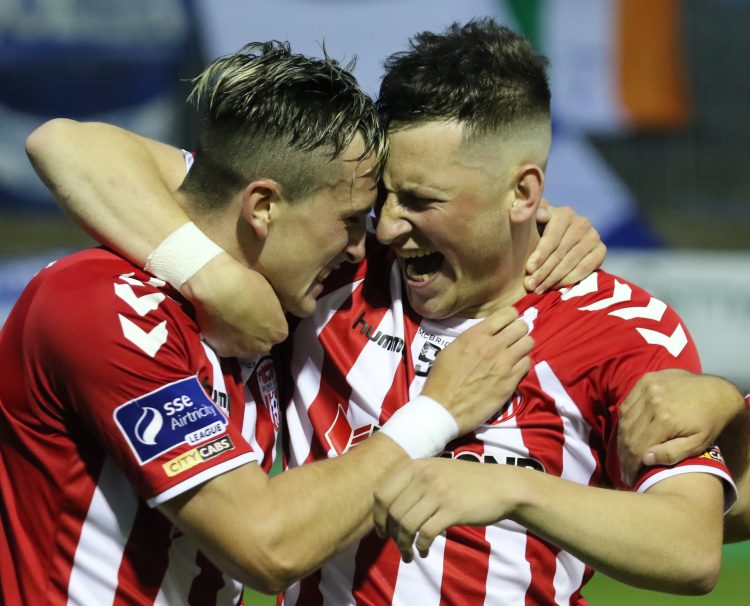 By Chris McNulty at Finn Park

DARREN Cole’s first Derry goal, in the 87th minute set up the win for Kenny Shiels’ team and Aaron McEneff tucked in a second three minutes into added time.

It was certainly more than a tad harsh on Harps, who looked to have done enough to earn a stalemate from what was, up to those busy late minutes, a timid derby tussle.

But the Candystripe hoards in the 2,896 attendance left dancing into the Ballybofey night after a win that moves them back up to third in the table.

Cole hammered home after Nicky Low’s corner fell into his path. Cole, who counted Rangers among his clubs in Scotland, riffled to the net and it was a strike that will have Harps tearing their hair out when they reflect.

McEneff twisted the dagger when he latched onto Rory Patterson’s pass and rounded Ciaran Gallagher to slide home.

Harps lined out without the suspended Paddy McCourt, Ollie Horgan having kept news of the former Derry star’s ban under wraps in the build-up.

French striker Ibrahim Keita was given his first start for Harps after an impressive late cameo last Friday night against Bohemians, but the former Wolves youth was replaced by BJ Banda for the last 24 minutes.

Keita flicked an earlier header off target from a Caolan McAleer corner and teed up the on-song Eddie Dsane for a big chance in the 36th minute. Dsane, who scored in each of the last two games, curled wide when aiming for the top shelf.

On the stroke of half-time, Sean Houston – a former Derry player who rescued a 2-2 draw for Harps with a late header last season in the Brandywell – could have broken the deadlock as he nodded wide from a Gareth Harkin free.

It took a timely block by Dean Jarvis to block Dsane’s advances just after the hour when he latched onto Ciaran Coll’s delivery while McEneff stung the midriff of Harps ‘keeper Gallagher from distance.

Derry were minus the suspended Aaron Barry and there was a surprise when the Derry team-sheet didn’t include the in-form Ronan Curtis, the striker said to have been dropped for an alleged breach of discipline.

Eoin Toal, signed from Armagh City in the Irish League, came in for his City debut and the defender was inches from the opener in the 26th minute. Toal’s header from the far post, after connecting to Nicky Low’s deep cross beat Gallagher, but struck the top of the paintwork.

Conor McDermott, Derry’s right-back, managed to get into a shooting position on the edge of the Harps box in the fifth minute, but off his lesser-used left boot, his attempt failed to trouble Gallagher.

When Derry won 5-0 in Ballybofey last August, a pair of McEneff penalties at the Town End sent Derry on their way to a landslide win.

They had big claims for a penalty at the same end when a McEneff free struck McAleer, but referee Ray Matthews shook his head and dismissed the appeals.

Harps had a shout of their own turned down early in the second half when Ethan Boyle, restored to the Harps XI, went down in the box in a tussle with Josh Daniels.

Earlier McAleer had been denied by Gerard Doherty as he latched onto a quickly-taken Sean Hosuton free while Harkin was unfortunate that a 10th minute chance landed on his right instep and his shot lacked conviction. A banner appeared at Finn Park last night telling Derry City to ‘Go Back To Your Own League’.

The lively McEneff had a thundering effort career wide off Damien McNulty and Gallagher denied Rory Patterson with his palms at close range as Harps repelled the Derry attack.

It was a case of the wrong man in the right place when Harps centre-back Kilian Cantwell found himself on the end of a McAleer delivery just after the break, the defender lofting over the bar from 12 yards.

Barry McNamee hit the winner for Derry in Friday’s 1-0 win over Bohemians and the Ramelton man curled a free kick over the target in the 51st minute.

Harps looked on their way to a share of the spoils – but Derry had other ideas.