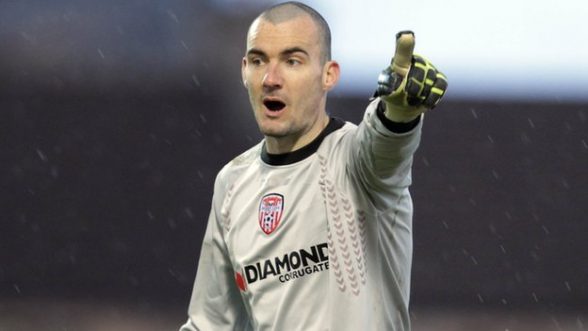 DERRY City picked up their seventh draw in nine games and were probably a touch lucky to come away with a point against a spirited Drogheda who are battling relegation.

An evenly contested opening ten minutes featured one chance apiece, with the first falling to Derry when Ronan Curtis fired a weak effort straight into the hands of Drogheda keeper Stephen McGuinness.

Drogs captain Sean Brennan then sliced badly wide after being set up by Adam Wixted following a mistake by Aaron Barry in the Derry defence.

However, the hosts then suffered a serious blow when McGuinness took a heavy fall after claiming a Nicky Low corner above his head and had to be stretchered off, to be replaced by Ryan Coulter.

The remainder of the first half was a scrappy affair, with plenty of errors on both sides.

Drogheda did have a good spell early in the second quarter when their centre-back Luke Gallagher twice threatened to score, once with a header and then a long-range shot.

Before the game Candystripes manager Kenny Shiels said he was looking for a good performance from his players for the travelling fans.

But the team were largely subdued and the game had just entered the first of eight minutes of stoppage time when Coulter was tested for the first time, diving to secure a Curtis cross-shot.

Ten minutes into the second half, the game was beginning to look as if it might remain goalless as defences remained on top, but then Drogheda created two chances in the space of a minute.

On both occasions Brennan was the creator for Marc Griffin, but to the home side’s frustration the striker had his first effort blocked by Conor McDermott and the second by keeper Ger Doherty.

Shiels made a double change, bringing on fresh legs in Nathan Boyle and Josh Daniels, and immediately the visitors began to look more threatening.

Coulter made a fine tip-over save to deny Mikhail Kennedy and Barry McNamee’s 20-yard effort was blocked by Thomas Byrne during a spell in which they forced three corners in quick succession.

Both teams could have snatched a late victory as Doherty made a fine reaction save from Jake Hyland before Derry sub Rory Holden headed wide from close range.