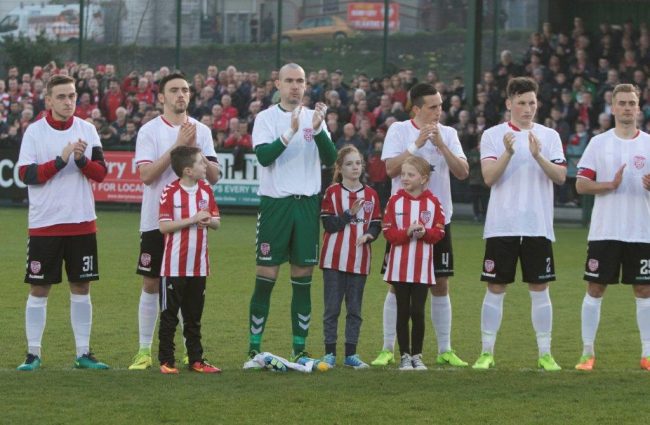 SSE AIRTRICITY PREMIER DIVISION: DERRY TRAVEL TO CORK HOPING TO GET THEIR SEASON BACK TO WINNING WAYS THERE is no doubt that the loss of ‘Captain Courageous’ Ryan McBride had a tremendous effect on his players, backroom staff and management.

Last Friday night’s match at Maginn Park was an emotionally charged evening with it being the first game the team played since Ryan’s sad and tragic passing.

Losing 3-2 to Bray Wanderers was disappointing.

But Derry showed great spirit and heart in the second half to come from 2-0 to draw level only to get beat with a 92 minute goal by Tom Claancy spoiling a great night for the Candy Stripes and their legions of fans who made the trip to Maginn Park.

Leaving the ground fans were not too dejected, hoping now that the first game without Ryan was out of the way, the team could put the defeat behind them and move forward.

This Friday, April 7, Derry City travel to table toppers Cork who have 21 points after winning all their opening seven games (kickoff 7.30 pm).

Last season’s winners Dundalk are in second place on 15 points with Derry City in third on 12  points.

A win in Cork will put the Candy Stripes in contention as they will have two games in hand on both Cork and Dundalk.

Let’s hope ‘Captain Courageous’ Ryan can spur on the players and make 2017 a season to remember for all the right reasons.