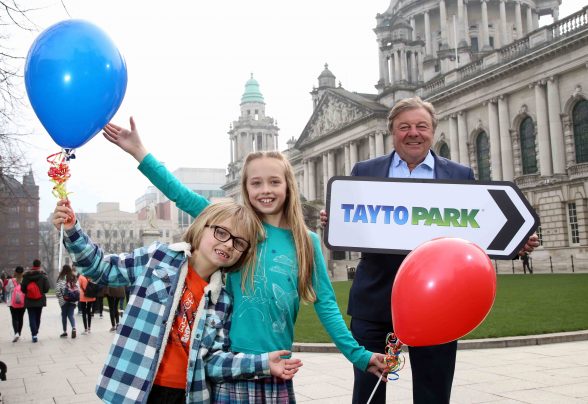 PARK LIFE: Amelia Bell (10) and brother Isaac (7) from Belfast are looking forward to Tayto Parks new 2017 season which kicks off on Friday April 7. Speaking at a launch event in Belfast, Tayto Park founder Raymond Coyle (right) revealed that more and more visitors are travelling every year from Northern Ireland to the County Meath park

TAYTO PARK, Ireland’s only theme park and zoo, has launched its new 2017 season with the news that a whopping 25 per cent of visitors to the County Meath park now travel from Northern Ireland.

As one of the most popular attractions on the island of Ireland, Tayto Park visitor numbers have risen year on year from 330,000 in 2011 to 762,351 in 2016, which means that almost 200,000 thrill seekers from Northern Ireland visited the park last year.

Now Tayto Park is gearing up for its biggest season yet as it opens its gates again on Friday April 7, with the promise of exciting new rides and attractions.

Speaking at an event in Belfast, Tayto Park founder Raymond Coyle said:  “Since we first opened our doors in November 2010, the Northern Ireland market has become increasingly important to us with almost 200,000 visitors travelling from the north last year alone.

“Last year was a record year for Tayto Park which is very encouraging as we get ready to open our gates to the public once again next Friday(April 7).

“We are confident that this season will be our biggest and best yet and have invested heavily in new rides and attractions that we’re sure will be a big hit with customers from across Ireland.”

New attractions for 2016 will include the Viking Voyage at the Park water flume ride and the World of Raptors birds of prey demonstration, which will both open in the summer.

These will complement a host of existing favourites including the gravity-defying Rotator, the Power Surge and The Cú Chulainn Coaster, Ireland’s first rollercoaster and Europe’s First wooden rollercoaster with an inversion.

“There really is something for everyone and visitors to the park can expect to have a jam-packed day of fun during which they can try out the numerous theme park rides before taking in the animals at the zoo which include a mountain lion, fossa and a range of birds of prey, just to name a few!”

Tayto Park caters to a wide range of sectors including primary and secondary schools who can avail of various tours all of which include admission to the park, unlimited access to all attractions and educational aspects ranging from business to ecology and conservation.

Tickets for Tayto Park start from €15 per person with discounts available when booking online.