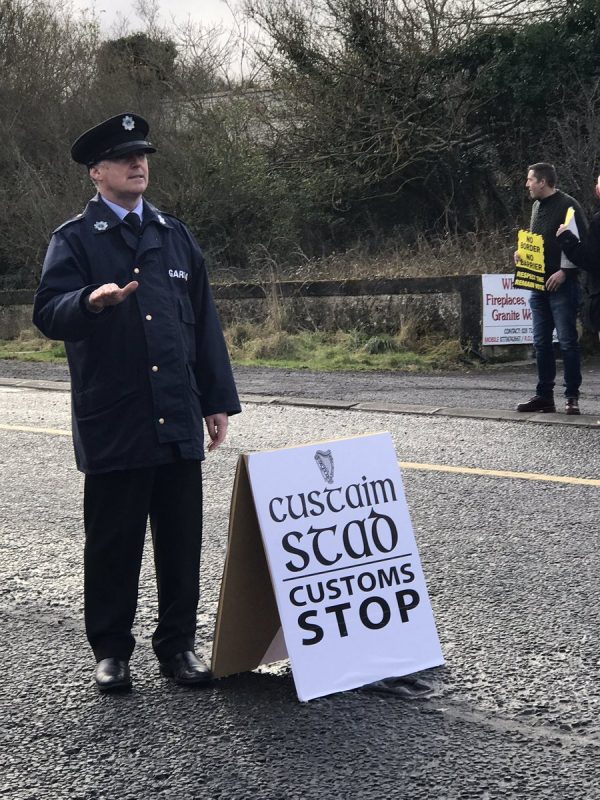 PROTESTS have taken place across border communities this morning as protesters simulate customs stops to demonstrate what they fear may occur post-Brexit.

Over 100 people took part in a protest against Brexit this morning in Bridgend on the Derry/Donegal border.

Organised by Sinn Fein, the protest involved a man standing in the middle of the road in a Gardai uniform depicting what life could be like if the UK officially pulls out of the European Union.

The border will then mark the division between an E.U. and non E.U. state.

Another protest took place in Lifford/Strabane.

Speaking at the Lifford/Strabane protest, Pearse Doherty said it was “unacceptable” that revenue officials have scouted positions to re-erect customers tariffs in Strabane.

Doherty then went on to say that a motion will be put forth in the Dail to allow the North to stay within the EU with special status.

Another protest took place in Armagh and Louth this morning, with protesters erecting fake customs stops to demonstrate their frustration with Brexit.

British Prime Minister Theresa May will trigger Article 50 over Brexit next month.

Durkan: ‘Living over the shops’ scheme must...

No plans to postpone North’s 2021 census