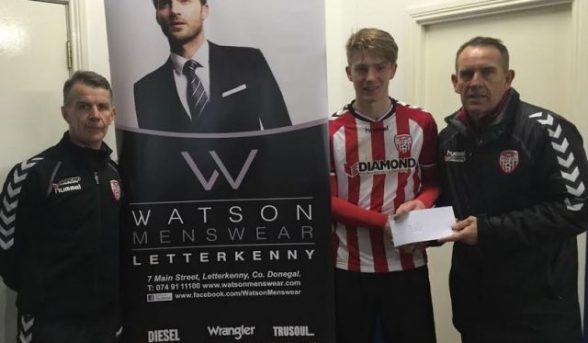 CATHAL Farren of Derry City Reserves has been named as the first Watson Menswear Ulster Senior League Player of the Month.

The 18-year-old picked up the award for September and the striker says he’s enjoying life in the Candystripes.

Farren bagged four goals against Bonagee United in a 5-1 win in the Donegal News League Cup and already has nine goals to his name this season.

“When you get a call up to this team, you want to prove yourself and just play,” Farren said.

“It’s always nice to get a few goals.

“It gets you really up for it to get to play for the reserves. They could play first team players, but they stick with the young players and show their faith.

“It gets us ready for the next stage.”

Farren hit a hat-trick last night as Derry City Reserves beat Finn Harps Reserves 3-1 in Ballybofey to move to the top of the USL goalscorers list.

In the first month of the season, Farren lit the touchpaper and is the recipient of the first Player of the Month award, sponsored by Leonard Watson of Watson Menswear, Main Street, Letterkenny.

Farren has come up through the ranks at Derry and has another year left with the club’s Under-19 team, but can feel his improvement as the work load grows.

He said: “We’re training five days a week and doing something every day. It’s not just the football, either. We’re in doing gym work and all. It’s busy, but it’s good and it’s really enjoyable.

“We’re told to play it out as much as we can from the back. That’s the way the first team play so it has to be like that for us. If you do happen to get a call into the first team then it’s not foreign to you.”

Farren has seen the likes of Conor McDermott, Rory Holden, Ronan Curtis and Ben Doherty get and take their chances in the City first team.

The reserves are managed by Hugh Harkin, but first team manager Kenny Shiels is hands-on with the second string.

Farren said: “Kenny and Hugh are brilliant with us. Kenny takes a big interest in the reserves.

“He came in last year and said he’d give youth a chance.

“People didn’t believe him, but he stuck to his word and the boys have all done well when they stepped up.”