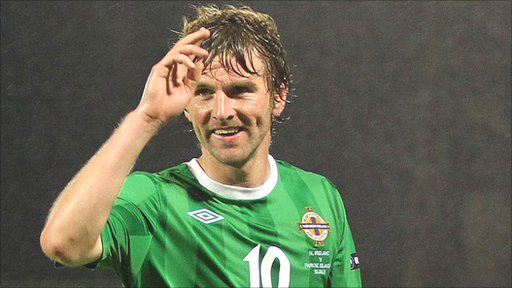 BIG Paddy McCourt looks set to play in the Irish League next season.

His hometown club Derry City turned down the change chance to sign him for the rest of the SSE Airtricity Premier Division.

At least three clubs have their eye on ‘Derry’s Pele’ who quit League Two side Luton by mutual consent in the summer.

Belfast sides Cliftonville and Linfield are keen on him.

Also in the hunt are Lurgan side Glenavon.

McCourt’s decision to leave Luton came after his wife was diagnosed with a brain tumour.

No reason was given but it was said to have been for “family reasons”.

But the ex-Celtic winger has told that his wife Laura was diagnosed with a brain tumour and after that everything after that, including football, paled into insignificance.

He decided that there was more to life than football and rang the Northern Ireland manager Michael O’Neill to explain his plans.

“I called Michael and explained what had happened and told him I wasn’t going to be available for the Euros,” said Paddy.

“When something like that happens, your only thought is for your family.”

McCourt told The Times newspaper that his wife was returning home from a holiday when their life was turned upside down.

“The flight landed at Gatwick and was taxiing to the airport when she had a seizure on the bus,” McCourt said.

“Paramedics were called to the scene and they rang me.

“They said they were going to send her to East Surrey Hospital. Naturally, I was very concerned.

“Within 48 hours it came back that they had found a brain tumour,” he said.

The doctors told the couple they needed to operate on the tumour and remove it as soon as possible.

Although the tumour was benign, it was growing. The date for the operation was 9 June, the day before Euro 2016 started.

McCourt said Northern Ireland boss Michael O’Neill told him to be there for his wife.

“As much as he’s incredibly serious about his football, when I told him, he said, ‘Don’t even think about the Euros. Just be there for Laura and make sure she gets better.’

“Laura didn’t need the attention it would have created if he had said what was really happening,” he adds.

The operation was successful and Laura has now been given a positive diagnosis.

“It was absolutely nerve racking,” he said, “but thankfully we were given the best possible news afterwards, which was that everything had been positive.

“Laura is now recovering and we’re told that in four to six months, please God, she will be completely back to normal.”