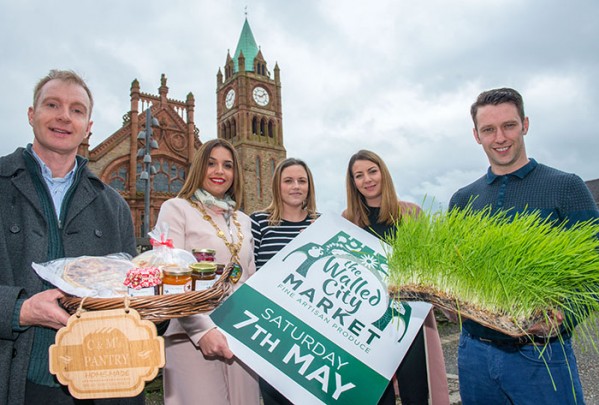 If you want to give your health a boost, then a visit to the Derry/ Donegal Wheatgrass market stall is an absolute must.

Owned by husband and wife team Gerard and Catherine Curran from Derry, the business has been in operation for 10 years and grew from a simple conversation Gerard had with his uncle about the health benefits of wheatgrass.  Starting to grow wheatgrass for himself and family, Gerard soon discovered that demand for the health product grew and therefore so did his business.

Speaking about his wheatgrass journey, Gerard says; “We started attending local craft fairs and markets, with the aim of raising awareness about the immense health benefits of this humble but amazing plant.  The response was truly overwhelming, as was learning about other people’s inspiring stories of their own personal experiences with wheatgrass.

“It’s great to see the investment by the Council which is a huge help to small businesses like us.

“There’s a great variety at this market from fresh fish to baking, local produce from local people providing their own unique stamp.  It would be great to see the people of Derry come out and support local traders and enjoy the market experience.”

“For regular customers, we’ll be setting up a loyalty card system at the monthly markets and also have some great deals on multiple purchases of wheatgrass.”

Derry / Donegal Wheatgrass specialises in fresh and frozen wheatgrass and they also produce Wheatgrass & Aloe Vera soap, which is 100% fragrance free and an excellent alternative for anyone who has dry skin and conditions such as eczema.

All products are available from Pauls Butchers, Buncrana Road, Culmore Road and Trench Road and many other outlets.  For full details find them on Facebook at Derry/Donegal Wheatgrass and follow them on twitter- @ddwheatgrass

The Walled City Market will operate from 9am to 4pm and there will also be family entertainment on the day.  For more information about the market visit www.derrystrabane.com/walledcitymarket