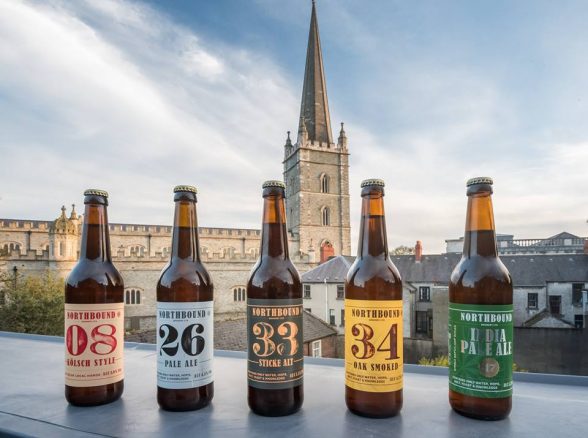 Northbound Brewery, which was established in the city last year, was among a number of businesses selected for the prestigious two-week ‘Taste of Northern Ireland’ showcase at Fortnum & Mason in partnership with Invest Northern Ireland and supported by Food NI as part of NI Year of Food and Drink 2016.

Martina Rogers, who co-owns Northbound with her husband David, a Master Brewer, said they were delighted to have been chosen to showcase two of the company’s beers, 08 Kolsch Style and 33 Sticke Alt, at the upmarket London store from May 5th-19th.

A number of events are being organised over the fortnight celebration which will offer opportunities to meet influential buyers, customers and suppliers at London’s premier food and drink retailer.

Martina, a native of Co. Fermanagh, said: “It gives you confidence in what you are doing when Fortnum & Mason, which epitomises the finest food and drink, is featuring us as a Hero Producer. It is also fantastic to have been invited to London next week when the CEO of Fortnum & Mason is hosting a VIP event. It is a great platform for us into both the London market and export markets and, hopefully a long-term relationship with Fortnum & Mason.”

Martina Rogers said the recent Big Cheese and Beer Expo organised by Derry City and Strabane District Council with support from Tourism NI and DARD’s NI Regional Food Programme, had been a “fantastic weekend” for business.

“This event really helped us to interact with customers; it could be a great annual event for Derry to become the beer and cheese capital of Northern Ireland. We are really enjoying the focus NI Year of Food and Drink 2016 is having on our sector.”

Martina and her husband David, a Glaswegian whose father is from the Sperrins in Co. Derry, met while they were both studying at Queen’s University in Belfast and spent ten years in Australia before moving back to Northern Ireland where they now run Northbound – the name was inspired by their decision to return to ‘the North’ – as well as being parents to three young children aged 5 and under.

Martina said: “We took a real punt coming to Derry as neither of us had lived here before but we thought the North West would also be a great place to bring up a family.”

Mary Blake, Tourism Officer with Derry City and Strabane District Council which is supporting Tourism NI’s year-long celebration highlighting everything delicious about our locally produced food and drink, said it was a great boost for Northbound, a rising star in Northern Ireland’s brewery sector.

She said: “We have just celebrated NI Year of Food and Drink 2016’s Brewing and Distilling month with the Big Cheese and Beer Expo in April at which Northbound was one of our leading local participant breweries.

“I am delighted at the news that Northbound has been selected by Fortnum & Mason to feature as part of a NI Showcase at its iconic Piccadilly store and, wish the Derry brewery every success in attracting new customers and markets for their unique beer products.”