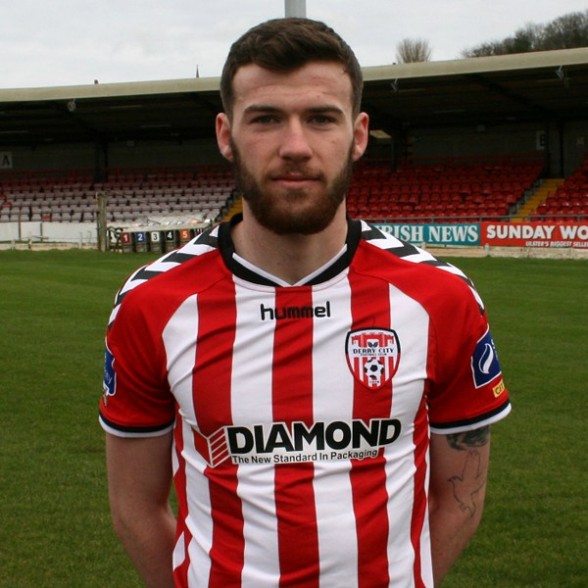 The tigerishly-earned point lifts Longford two places off the bottom of the table as Derry slip two points behind leaders Dundalk.

Manager Kenny Shiels will be wondering how his team take didn’t all three points back to Derry given all his team’s possession.

In-form Derry went into the match unchanged as they chased a sixth win in seven games.

Bottom-of-the-table Longford, with just one point and one goal from their last six games, made four changes, including a surprise league debut for 17-year-old Tristan Noack-Hofmann at left-back.

With John McKeown sitting in front of their back four, Longford started positively, enjoying a good deal of early possession.

But it was Derry who had the first sight at goal as Barry McNamee curled a free-kick over the top 10 minutes in after Longford defender was booked for a foul on the Derry midfielder.

Derry’s Ger Doherty was the first keeper to see action seven minutes later, though, as he had to show showing his agility to tip over Town skipper Kevin O’Connor’s shot after a ricochet off McNamee.

Doherty’s opposite number, Skinner, kept the visitors out at the other end on 24 minutes with a finger-tip save of his own to turn Rory Patterson’s cross-shot out for a corner after a surging run by right-back Niclas Vemmelund.

Two minutes later, Longford stole the lead from their second corner of the game. O’Connor sent the ball into the area where it was met with a thumping header from O’Sullivan for his second goal of the season.

Derry really should have equalised nine minutes later when awarded a penalty after Patterson was upended by McKeown inside the area. But Skinner comfortably saved with his legs from Patterson’s weak spot-kick.

The woodwork then rescued under pressure Longford five minutes before the break. Dean Jarvis worked a one-two with McClean on the left to crash his shot off the under side of Skinner’s crossbar with the ball cleared.

Derry owned the ball for much of the second half, but struggled to create chances as Longford defended tenaciously.

However Longford’s resolve was broken on 73 minutes with Skinner then batting away a Keith Ward free-kick five minutes later as Derry chased a winner.

Longford had a good shout for a penalty waved away by Wexford referee Sean Grant a minute after that when the tireless O’Sullivan appeared to be pushed over by Derry skipper Ryan McBride.

Peter McGlynn skied over when well placed in the box for Longford before  McNamee wasted a chance to win it for Derry on 88 minutes, scuffing his shot from Patterson’s pass with the ball trickling into the arms of Skinner.

Next up for City is the visit of Sligo in the EA Sports Cup on Tuesday.