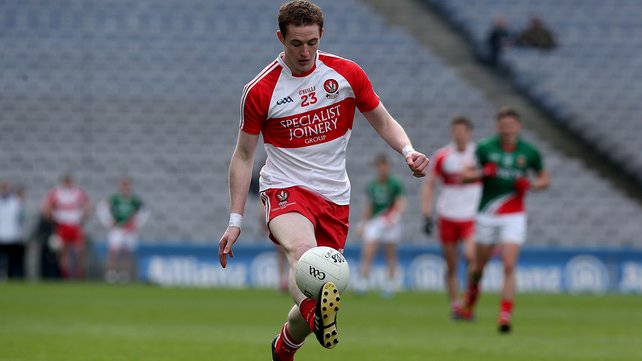 Derry county footballer Aaron Devlin, the first GAA player to be banned for comments made on Twitter is expected to have his suspension drastically reduced – it has already been halved.

Ballinderry star Devlin received a 48-week ban over derogatory comments made on Twitter after his club’s Derry SFC final defeat to Slaughtneil in October.

Inter-county player Devlin has been banned for a subsequent derogatory tweet about the match officials, who awarded a disputed late goal that was enough for Slaughtneil to claim the title on a 1-08 to 0-09 scoreline.

He appeared before an Ulster Council Hearings Committee last night with Ballinderry officials hopeful of being informed today that his suspension has been reduced to eight weeks.

As yet there is no specific rule within the GAA’s Official Guide pertaining to social media, but a new ‘Code of Conduct’ has been circulated to county boards ahead of a motion being brought to annual congress next month.