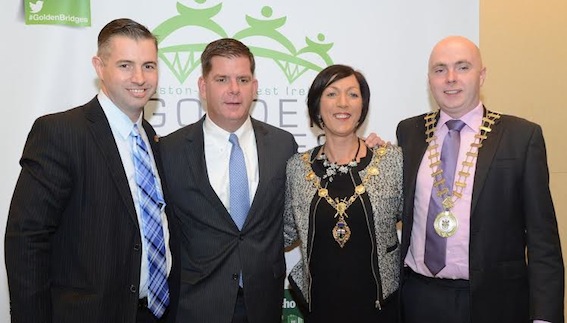 The visit was organised as part of a North West delegation that included the Mayor of County Donegal, Cllr John Campbell and Derry City Council’s Economic Development Manager, Kevin O’Connor.

Cllr Stevenson said Derry and the North West region as a key location for inward investment and a good place to do business was the key message at all their meetings and events they attended.

She added: “There is so much positivity and awareness of Derry in Boston.

“Everywhere we went people were hugely excited about us and what we are doing and how we are making huge steps forward in terms of creating new opportunities for our communities.

“They were particularly interested in our successes since City of Culture and our ongoing legacy work and how we are working to develop our economy and cultural offering.”

Cllr Stevenson said one of the “learning curves” from the trip was emphasis placed on investing in education and the digital economy.

She added: “If we are to be successful in developing our economy we need to be investing in our university and our digital economy, that is key to our continued success.”

During the trip Mayor Stevenson attended the Golden Bridges Conference and held meetings at the University of Massachusetts, Lowell, MA; the M2D2 Project and the Centre for Irish Partnerships. They met with the Mayor of Boston Marty Walsh and met with the Chancellor Marty Meehan and the State Senate President Therese Murray.

She said a key element of the visit was the partnership arrangement between Derry and Donegal.

“It was a fantastic opportunity for us not only to showcase Derry but to sell the entire North West region and promoting the fact that we have Donegal on our doorstep.

“We worked very closely with our counterparts from Donegal during this trip to look at how we can link up with Boston to benefit both regions.

“It was hugely important for us to be represented at the conference and the business meetings to tell our story and promote what we have to offer in terms of leisure and business tourism opportunities.”

Following on from the trip, Mayor Stevenson said she will be re-engaging with the contacts made in the US to see if she could further explore those discussions.

“We will be actively following up with all the people we met during the visit to see how we can move those discussions further.”

Cllr Stevenson concluded: “We will be continuing to work with Donegal to build on this positive partnership to ensure that we can continue with this important links that will hopefully lead to economic and tourism benefits for the region.”