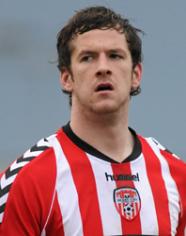 MCBRIDE A DOUBT FOR DERRY IN FAI CUP SEMI-FINAL REPLAY Central defender Ryan McBride is a major doubt for Derry City in their FAI Cup semi-final replay against Shamrock Rovers being played tonight in the Brandywell.

Goalkeeper Gerard Doherty is another concern after missing training yesterday due to sickness.

Barry Molloy, Barry McNamee and Philip Lowry are carrying knocks but are expected to be fit.