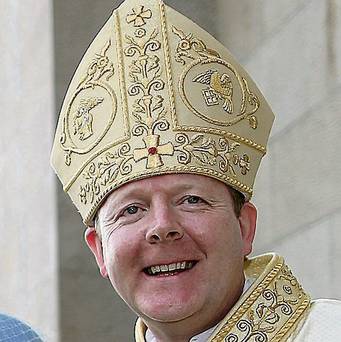 The new Catholic Archbishop of Armagh and Primate of All Ireland, Derry cleric Eamon Martin, has been congratulated on his appointment by his Protestant counterparts.

The Most Revd Dr Richard Clarke, Church Of Ireland Archbishop Of Armagh And Primate Of All Ireland, also paid tribute to Cardinal Sean Brady, Archbishop’s predecessor.

Archbishop Clarke said: “On behalf of the people of the Church of Ireland I ask God’s blessing and every happiness for Cardinal Seán Brady in his forthcoming retirement.

“He has been a good friend to successive Archbishops of Armagh and to the wider Church of Ireland throughout his archiepiscopate, and we are grateful to him for this unaffected generosity of spirit.

“And, on a personal note, I wish to thank Seán for real kindness and warm friendship over many years. We all hope that he will enjoy both true fulfilment and good health in the years ahead.

‘It is a pleasure at this juncture to pray the blessing of God also for Archbishop Eamon Martin, as he takes up new and demanding responsibilities as Archbishop of Armagh.

“Since he moved to Armagh – shortly after my own arrival – he and I have come to know each other well, and I very much look forward to working collaboratively with Eamon as he now embarks on this new phase in his ministry, and in the life of the Roman Catholic Church here in Ireland.”

The Moderator of the General Assembly of the Presbyterian Church in Ireland, Right Rev. Dr. Michael Barry, also congratulated the new Catholic Primate.

He said: ““I and my colleagues in the Presbyterian Church look forward to working with Archbishop Eamon Martin as he takes up his new role as Primate of All Ireland and wish him well as he assumes new responsibilities.”

He said: “Cardinal Sean Brady has a deep spirituality which has been so evident to those who met and worked alongside him during his years as Archbishop of Armagh. He sought to give leadership to his people through both good and difficult times during his 18 years in office and many will miss him greatly.”

“Dr. Brady was committed to building good relationships with the Protestant Churches and their leaders. On behalf of the Presbyterian Church in Ireland, I would like to wish him a long, peaceful retirement and that he would know God’s blessing in the days ahead.”