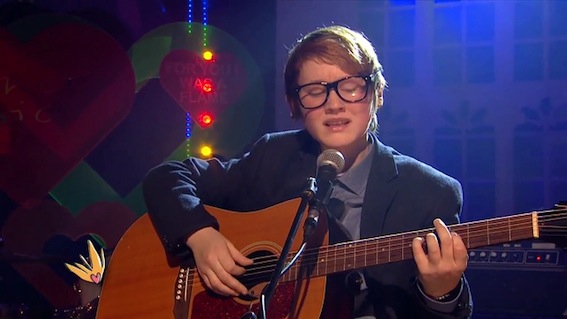 Bridie Monds-Watson (aka Soak), one of the most talked about up-and-coming talents in the music scene at present, has continued her rise to stardom by penning a new deal with Rough Trade Records (RTR), a label which boasts Duffy, the Smiths, and the Libertines among its former clientele. An ex-pupil of Oakgrove College in this city, the aspiring 18-year-old singer-songwriter has found considerable fame already thanks to hit singles “Sea Creatures” and “Blud” – but following this announcement, amid speculation about future releases, it’s clear  there is a lot more to come from this Derry girl.

RTR declared the agreement to the world via Twitter, stating they were “incredibly happy to announce Soak to the Rough Trade Family” and as the news spread, messages of congratulations and excitement quickly followed, her ever-growing fan base clearly elated by the revelations, particularly as it was admitted that there would be “new music soon” from the teen.

I caught up with Soak to discuss her feelings on signing the new deal.

“I’m generally overwhelmed with the amount of support that I have received, and I feel incredibly lucky to be in this position,” she said.

“Rough Trade Records are such a legendary independent label, and I’m very excited for my future with them.”

“This is really exciting and I’d like to say thanks for all the messages. New stuff is coming, it’s going to be good.”